What is extrapyramidal cerebral palsy?

Before I had Malachi, I thought that "special needs" or "disability" was sort of one big monolithic thing. I didn't know anything about cerebral palsy, but I think if you'd forced me to define it I would have said it was an inability to walk, or something really clear and defined like that.

Now I know that cerebral palsy is pretty much anything, from a barely noticeable speech impediment to a complete reliance on technology to perform such tasks as eating and defecating. So many different things can be affected either directly or indirectly by brain damage that early in life and there are so many different parts of the brain that can be affected, and all to varying degrees.

Malachi's "brand" of cerebral palsy is called extrapyramidal. We were told this last year when he was officially diagnosed with CP. Since then, other medical professionals have used the terms "mixed," "nonspastic" and "athetoid" to describe his CP.

This is pretty confusing to us laypeople. A couple weeks ago, these terms came up in a Facebook discussion group and I realized we weren't the only ones trying to figure out what this meant. People there found my explanations helpful, so I thought I'd post them here*: 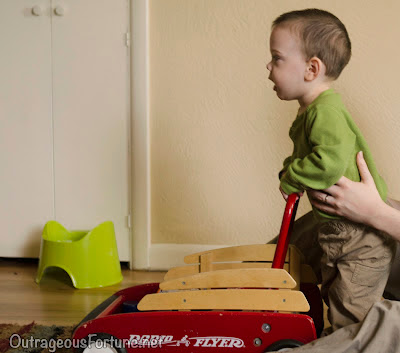 Extrapyramidal refers to the structure of the brain that was affected. It is a relatively rare diagnosis, about 10-15 percent of cases. It is deep in the brain so it is unlikely to affect white brain matter, which is cognition. Because of the brain parts affected, patients either present as "nonspastic" or with a mix of spastic and nonspastic muscle tones.

Most people with CP are spastic in some way. I have no experience with spasticity, but what I've gathered is that their affected muscles are near-constantly clenched and there's nothing they can consciously do about it. Even in their sleep, that muscle is clenched. (The origin of the profane "retard" chest thump with a bent wrist is a spastic hand movement.) If you would like to learn more about life with spasticity I recommend this blog or this blog as they obviously has more idea what it's about than I do!

Malachi has uncoordinated movements and either too much or too little tone at any given moment to accomplish a task effectively ("mixed") but he isn't spastic. When he is sleeping or at rest, there are no muscles that are clenched and he has full range of motion, so he is nonspastic.

Athetoid is one of four types of unusual movements that people with damage in the extrapyramidal part of their brain display, the others being ataxia, dystonia and chorea. I regret to say that I have no good information about what athetosis is. As soon as I think I understand it, I talk to a different medical professional and they say, "Oh, no, that's not it." I've come to the conclusion that there is no standard, globally understood definition for athetosis.

When I have interrogated my (very learned) PT about this diagnosis conundrum, he shrugs and says it used to be called simply "mixed" and that it doesn't really matter what you call it.

It doesn't, really. But, really, it does.


* Please keep in mind that I'm not a medical expert in any way! If you are or you have a different understanding of these terms, please tell me about it in the comments. I'm very open to discussion and possible corrections. And if you're an adult with any of these diagnoses I'd love to talk to you!