When worse is somehow better

Today we had another appointment with our new neurodevelopmental pediatrician. Yeah, that one.

I'm still struggling to wrap my head around the things she told me, but since I put off writing my once-a-day post until now, I have to write about it because it's all I can think about.

First, the good news: Malachi has gained a pound and grown 3/4 of an inch in two months. Yay!

Then, the sort-of bad news. I asked her for more information on why she thought Malachi's expression of CP was unusual. She said that she would guess that 999 out of a thousand preemies with PVL (Malachi's type of brain injury) have spastic diplegia — tight legs, pretty well-functioning trunk and hands, like this awesome kid. Malachi instead shows a lack of control that would be seen from damage in the basal ganglia. Our old neurodevelopmental pediatrician told us this, too, although he called it extrapyramidal cerebral palsy. What he neglected to tell us is that in order for the bleed to have reached the basal ganglia, it most likely means that the damage is a lot more severe than we thought.

But today, strangely, I was actually kind of glad to hear this. Malachi is nearly 20 months old. He can't roll, sit, crawl or really do any independent gross motor movement, despite lots and lots of work and hope. To hear that the damage is worse than we thought sort of lowers the bar. Now I can pretend all our hard work has paid off in some way and that he is doing better than expected instead of worse.

Because despite how much I research and pay attention to new therapies and methods, I know exactly what is proven to be far and away the most effective in preventing motor control problems:

Not getting brain damage.

I know lots and lots of parents who love their kids with CP and work really hard for them. Some of their kids are doing really well, like this one, others, not so much. I sincerely don't believe it's because some parents love their kids more, or tried more things, or stuck to the best thing, or whatever. I think of it like the 80/20 rule. Maybe with all of the awesomest therapy and the best-trained folks, you could improve your kid's functionality 20 percent. And that's awesome and totally worth trying for. But 80 percent is just the way it is.

That brain done got damaged and that's that. 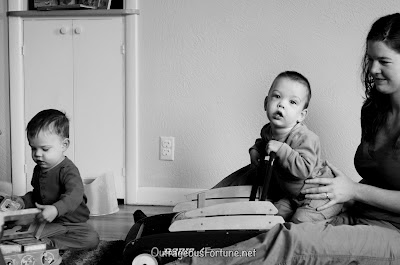