New EXCERPT from A Twist of Fate


As promised, here is a never-before-seen (unless you've already read the book!) excerpt from A Twist of Fate.

In this scene, Brandy, a rich girl from California, has been transported into the life of Sita, a girl from the Mumbai slums. Sita recently got in trouble with Sahib for defending Nemo, a young boy and her frequent companion.

Brandy and Nemo talked quietly for hours just outside the door to the shack while the woman and girls slept together in the large bed. 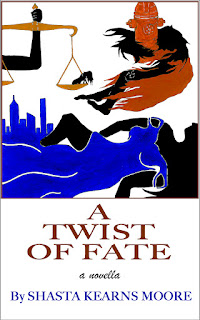 Nemo, feeling guilty that Brandy had suffered such an obvious brain sickness on his behalf, patiently answered her questions, as bizarre and self-evident as many of them seemed. He often had to rephrase when she didn’t understand even common Hindi expressions. He explained that their neighborhood, full of relatively new arrivals to the slums, had no choice but to buy water from Sahib, a gangster who controlled what was supposed to be a public spigot. The government, he said disdainfully, had turned a blind eye for years and the people had long ago given up hope of ridding themselves of Sahib’s rule. The slum folks were simply no match against Sahib’s power and wealth.
A trickle of those folks, mostly female heads of household, stopped by to offer their condolences for the family’s hard luck along with a meager offering of food or supplies. Brandy couldn’t help but think how much their donations were like a drop in a bucket — like many drops in a bucket — and this gave her an idea.
Eventually, Brandy ran out of questions, at least those Nemo could answer. She asked Nemo to meet her there in the morning and spent a restless night thinking about her strategy and trying to ignore the flea bites and the smell of the bedding.
The next morning, Brandy cleaned herself up the best she could. She was able to get most of the visible dirt out of her clothes but she puzzled over the tear in the jeans for a while. She knew that sewing it would do no good — even if Maa had been able to find a strong enough needle to work through denim — as the stitching would be immediately obvious. Finally, she borrowed the shears used for cutting long lengths of cloth into manageable pieces and created a mirror image slash on the back of the other pant leg. She hoped it looked like a new fashion trend, and, she decided, it sort of did.
Nemo soon appeared and the two headed for their first destination: the run-down TV repair shop several blocks away where Nemo acquired his name. The small boy banged loudly on the rusty metal security door on the corner of the shop. Amir Khan and his son of the same name lived above the store. The father peered out his upper floor doorway, saw it was Nemo and shouted down the steps: “Yes? What do you want, little one?”
“Is Amir home? We need to speak with him. It’s urgent.”
“Well, I know there was some trouble with Sahib’s pump house but I don’t think he’s left yet…” Mr. Khan said and disappeared inside without further explanation.
A few minutes later, the younger Amir bounded down the steps, throwing on a faded T-shirt as he went. He stopped short when he saw Brandy.
“Sita? Is that you?”
“Uh... yeah.” Brandy made a note to sound more sure about this in the future.
“Well, uh, you look good. I mean, where’d you get those clothes, and your hair is really… nice.”
Brandy forged ahead with her plan as much to stop Amir from staring as to speed up her progress.
“Amir, Nemo says you might be able to do this,” Brandy said, pulling out a scrap of cardboard she’d taken from the dump and on which she’d etched a diagram with an inkless pen.
He examined the diagram and looked up at Brandy in surprise, then at Nemo in disbelief and started laughing.
Brandy was getting annoyed. She tried to snatch back the drawing but he was too quick.
“Are you serious? Where did you get this anyway?” he said, holding the cardboard scrap just out of reach.
“Look, I thought you were a plumber or something, but if you can’t do it, just give it back. Give. It. Back,” she said, jumping. Amir was still grinning.
“Haa, yeah, I can do it, the question is, can you? This is going to cost money, you know.”
Brandy rolled back on her heels and glared at him.
“Yeah, I know.” She paused, then, angrily: “How much?”
“A lot. Like, a couple lakh, at least.”
She turned to Nemo. “What’s a lakh?” After an evening of such painfully stupid questions, Nemo was able to take it in stride and ignored Amir’s incredulity.
“A lakh is 100,000 rupees, remember Sita? Just like a crore is 100 lakh.”
“Ok, right, I got it.” She turned back to Amir. “So, if I got a couple lakh, you could do this? We could make this happen here?”
Amir looked back at the drawing and ran his fingers through his soft black hair. He was quiet for a long time when finally he said:
“Sahib is sure not going to like this. I’d be out of a job for sure if it didn’t work.” He paused. “But, if you can get that money and find a location, I’ll do it for you.”
Nemo cheered, Brandy grinned.
“Deal! Ok,” she said to Nemo, giving a quick high five, “let’s go get that money.”
“Where do you think two slum kids are going to get that kind of money?” Amir shouted after them, but they were already gone.

This post is part of a week-long push to convince you that my novella is awesome. It includes a giveaway that you should enter!
A Twist of Fate is now available for FREE to Amazon Prime subscribers. Otherwise, it's just $2.99 for the Kindle version (you can download a FREE Kindle app to view it on) or $6.99 for a printed version.