Jaden is just a stellar human being

This blog — as well as the majority of my waking thoughts — is mostly about Malachi and his condition. This is not a surprise to me. In fact, it's one of the biggest things I feared when I heard Malachi's diagnosis, the thing that seemed excruciatingly unfair. That not only would he suffer but his identical twin would be deprived of an equal station in his parents' lives and would probably grow to resent that.

Nineteen months later, I can say that he has. As much as I try to pay attention to Jaden, Malachi just requires so much more of me and I can tell Jaden is starting to resent it. Jaden's typical power play involves books because he's the one who can walk over and pick one out. He picks the book he wants and shoves it into Malachi's face — not my hands — when I've been helping Malachi play for too long.

Recently, I asked my mother-in-law if she could take Malachi so Jaden and I could have a day together. I think he really enjoyed himself and I know I did. We spent what seemed like hours reading book after book while he got to sit in my lap — the place that Malachi usually occupies because he can't sit up by himself.

Jaden is just a stellar human being and I wish I could have a whole blog devoted to him and his awesomeness. But I only have so much time, so I decided to collect here a list of the amazing and incredibly cute things he's done in recent weeks. Keep in mind that he is only 17 months adjusted age and so far doesn't talk (at least in real words) a whole lot. I think even you folks who don't have the great fortune to be his mother will be impressed. 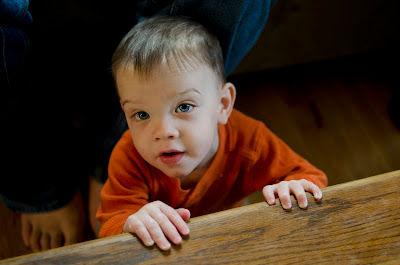 - Recognizes when things are trash (examples include used tissues, a tiny piece torn from a book, outdoor debris, bottle caps, etc.) and throws them away.

- Puts dirty laundry in the hamper (this one needs a little more guidance or else he starts taking out clean clothes from the drawers and putting them in too... as if I didn't do enough laundry already.)

- Squints his eyes and crinkles his nose in a sort of sarcastic, yet good-natured, "you think you're so funny" look.

- Pauses in the middle of walking whenever he hears music and begins to dance.

- Has two dances: a sort of low booty drop that most toddlers have while standing and a weaving Stevie Wonder dance while sitting, sometimes combined with the squinty eyes in a comedy double-punch.

- When I put a diaper on the ground and tell him it's time to change his diaper he'll come close and lay down so I can put it on. However, he does hilariously lay down several feet away from where I've put the diaper.

- When I say it's time to potty he makes the sign for toilet, excitedly runs to his special potty, sits down and says "pssssss." (So far no actual business has made it into the potty, but I'm good with pretend for now.)

- Enthusiastically points out every. Single. Cat. Anywhere. This is best exemplified by a recent trip to a big box store where we found ourselves in the cat food and litter aisle. I only caught the last few seconds on tape. This had been going on for at least a minute before I thought to get my camera out.


Such a good kid.