The elephant in the room

The older my boys get, the more I find myself in public with them, knowing the person next to me is in the process of figuring out that there is something not quite right about one of them. 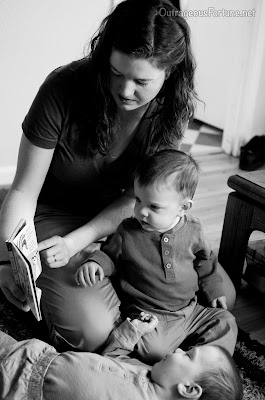 Today I went to a library storytime for babies. For most of it, Malachi was in my arms while Jaden roamed the room, but that wasn't too unusual; many other children were in laps as well. But at a certain point the storyteller brought out a bucket of toys for everyone to play with. This apparently was the cue for the moms to start chatting while their children were happily distracted. I spent a few minutes helping Malachi pick out and play with toys, but I had come with another multiple mom and I wanted to chat, too. So I left him laying on his back on the floor in the middle of the room.

I'm probably being paranoid, but it seemed like I could feel, one by one, the mothers in that room asking themselves and each other a silent question: "What is wrong with that kid?"

They didn't act weird towards me or towards Malachi; they acted like everything was normal. But we all knew there was an elephant in the room and no one knew how to bring it up.

I've heard enough times by now that people take their cue about how to react to your child's disability from you. If you act like it's no big deal, they will too.

I guess I'm just not sure what the best way to "act like it's no big deal" is. If it truly is something that doesn't matter and isn't shameful, doesn't that mean you talk openly about it? And since people aren't going to ask you directly because they are worried about offending you, should you just be upfront and boldly answer their unspoken question? How do you do that in a way that doesn't seem self-conscious? How do you do that in a group situation?

Recently, I tried to "break" the news to a twin mom who was praising my courage for getting out by myself with the two of them. "Well," I laughed, pointing at Malachi, "he doesn't move very fast." She didn't laugh. She was just confused and unsure if it was something OK to laugh about.

Another time, a dad asked what was "up" with Malachi. Relieved, I launched into an explanation about his CP only to realize he wasn't asking about that at all.

Many other times, I've sat silently, wondering if they are wondering. I think about how I would want to be asked, but nothing sounds good. I don't envy their role any more than mine.

Does anybody really know? How exactly does one address the elephant in the room?