If we don't talk about disability,
will it go away? 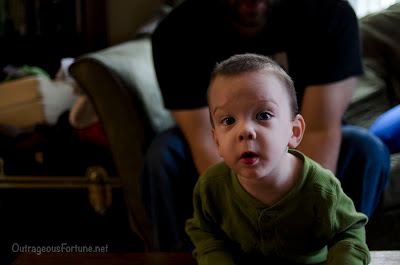 I've spent a lot of time in the last year and a half imagining what the world would look like if disability were considered normal. What if it were no more remarkable than the color of a person's eyes?

There are many people who advocate this idea. To them, a disability is just like a person's race or gender. So, for example, just like we wouldn't need the backstory on an able-bodied person to judge his singing ability, neither should we ask the disabled person.

Many of the people who commented on my quest to find the best way to address the elephant in the room said there is no reason for me to say anything at all. In fact, by being upfront about it, I would be giving Malachi's cerebral palsy primacy in who he is and how people see him. The best thing to do, said many commenters, is to not talk about it or be very brief.

As much as I try to think about it in this way, it just doesn't ring true for me. Not talking about disability will not make it seem more normal in someone else's eyes. Not talking about a taboo is not an effective way to erase the fear, uncertainty and discomfort the majority population has about it. The only thing that helps in the long-term is talking about it, and guiding others towards satisfying their curiosity about it in a safe and respectful way — something they almost certainly won't know how to do automatically.

It reminds me of a time when I was about 16. In preparation to volunteer at a domestic violence shelter, I was in a group training with about 20 other people, all much older than me. There were several black women in the group and at one point the conversation turned to oppressive language and how saying "black" was offensive but saying "African-American" was inaccurate. Someone else chimed in with: "I hate it when I hear the term 'people of color.' I mean, I don't see any clear people walking around!" Everybody nodded and mumbled their assent, but I had had enough.

I told them how important race issues still were in this country and how important it was for us to have words to talk about them. Taking away term after term or otherwise making the majority population scared or ashamed when they are trying to be appropriate will just make us not want to try the next time. Even if the words are not perfect, we have to be willing to see the intent behind them. Until racism is well and truly not an issue at all, we still need ways to describe each other. Simply erasing them from the language won't make the prejudice go away.

Likewise, simply not talking about an obvious or unusual issue will not make it seem normal.