Using VitalStim to Counter Dysphagia in Kids with CP

When Malachi was first born and in the NICU, he ate more readily and gained weight faster than his identical twin. For several months, he was the larger of the two.

It was not to last. He began to develop a strange behavior during breastfeeding. He would suck for a while and then it was if something sharp poked him in the mouth. He would rear back and cry, or simply stop sucking and do that silent scream that babies do when they are so upset they can't breathe. For months I worked with lactation specialists to figure out what was going on but nobody had any useful ideas.

Finally, just two days after their first birthday, we did a swallow study, which is a nice term for feeding a very hungry baby barium while strapped inside an X-ray machine. The test results showed that his swallowing muscles weren't working together with the customary split-second timing. Thin liquids zip down his throat too quickly for his swallow to keep up. Have you ever had a "bad swallow" where something shoots down the wrong tube? This was happening to him pretty much every mealtime.

The only solution for him, I was told, was to add thickener to his liquids until they are the consistency of honey to avoid it dripping into his airway and risking aspiration pneumonia.

If we didn't thicken every cup of water, juice, milk, whatever — the feeding specialist tried to impress upon us — Malachi could die.

P.S.: This is a condition that gets worse with time.

So, we started going to a different hospital feeding clinic where they were a little less reactionary but still wanted us to add thickener

to his bottles. Eighteen months later, the developmental pediatrician told us that back at the other hospital they had this device that had been shown to improve dysphagia. Funny. I wonder why they didn't mention that when we were there. Maybe it's new?

(Nope! Speech Therapist Steve Gorsek has been using it for about a decade.)

It's called VitalStim and it is an electronic stimulator, similar to what is used in many physical therapy clinics for injury rehab. In this case, the therapist attaches two small conductive stickers to the patient's neck and turns on the machine to electrically contract the muscles according to a set pattern. The goal is to strengthen these muscles and teach them how to work better together. Treatments are about 30 minutes, during which the patient should be eating.

So, we gave it a try last summer for a recommended course of once a week for 10 weeks. We did see marginal improvements — he was eating his bottles faster and with less gurgling sounds afterwards. However, we still had to thicken his liquids and he still wasn't eating much regular food. His weight continued to gain poorly.

A little more than a month ago, we started a course of VitalStim again. We are still seeing improvements and this time they seem a little more substantial.

As for Malachi, he really hates having the stickers put on his neck and gets anxious about it beforehand, but once they are on and doing their thing, he is a happy camper. He watches Blue's Clues, drinks a bottle and is hand-fed Goldfish crackers like a Roman emperor. 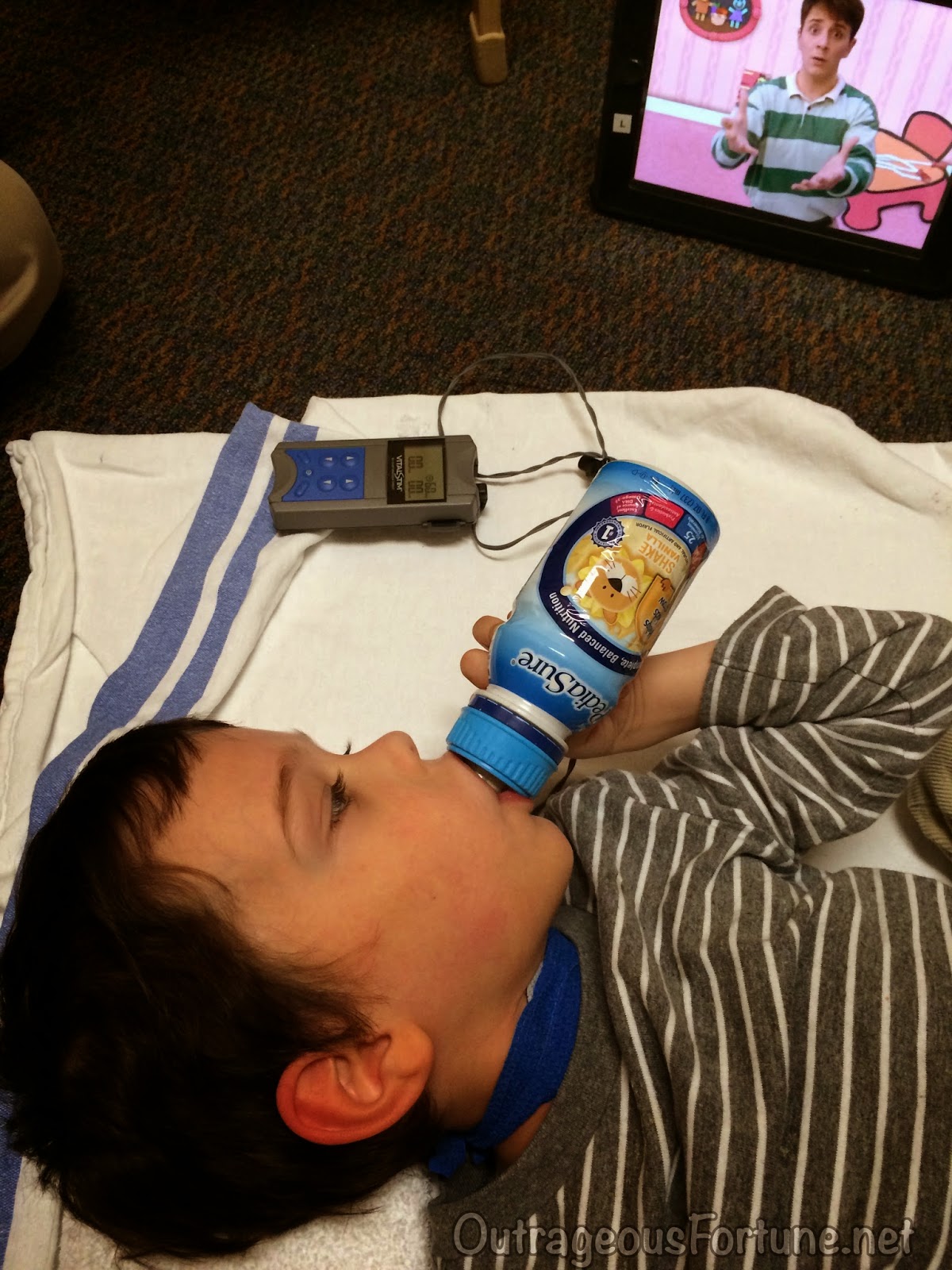 Like most things we do, it seems to be helping, but what exactly and how much remain a mystery.