Our Fancy New AFOs
and Our Journey to Get Them

AFOs, or ankle-foot orthotics, are common vernacular for most special needs parents. These devices are designed to aide in proper foot and leg positioning so that children develop properly.

I have no firsthand experience with traditional AFOs. Criticisms I've heard of them — even of so-called "dynamic" AFOs — include:

Fans of Dr. Paul Jordan of Long Island and his in-house orthotist Mike Smith convinced me to try their AFOs first. We started by e-mailing Dr. Jordan a year ago in February. He asked us to send videos of Malachi every couple of months. (You can see a few of them on my Vimeo account.) He continued to answer our questions and even wrote us very detailed and revelatory analysis of our son's movements — all at no cost to us. Just simply an amazing human being.

In November, Dr. Jordan said the time had finally come for a visit. With the holidays coming up, we planned a trip for the second week in January… which turned out to be a really bad idea.

The day before our trip, I called Delta to confirm our reservations and ask about special services for Malachi. Their automated service said I would be on hold for an hour and would I like a call back instead of holding? Yes, I would.

TWENTY-THREE hours later — after our scheduled departure! — I get the call back. In the meantime, my husband and I had driven to the airport to talk to a real-live Delta employee and determined that the Polar Vortex had cancelled 800 bajillion flights. Our nonstop to JFK had turned into a three-leg journey, any one of which could be canceled leaving me stranded with waaaaay too many carry-on items and a grumpy three-year-old who can't eat most commonly available food.

We rescheduled for Spring Break.

By mid-February, I finally got around to sending Dr. Jordan some more videos and a CD-ROM of Malachi's recent hip x-ray. He called a week later to say that based on this new information we wouldn't be able to use his AFOs without a special surgery called Selective Percutaneous Myofascial Lengthening (SPML). Malachi's problem wasn't so much his feet, it was that the powerful thigh muscles were torquing his lower legs so much that the devices wouldn't have much of an effect, except perhaps when he wasn't moving, which would defeat the purpose. "It would be a fight between the skin and the AFOs and the skin would lose," Dr. Jordan said.

At that point, we had less than a month before our trip and I thought the likelihood that we could get a surgery date with a highly sought-after specialist that fast was slim to none. Fortunately, as I came to find out, Dr. Roy Nuzzo and his team are not your typical medical office. Husband and wife assistants Rob and Enza Smith gave me their personal cell phone numbers and shoehorned us into a time spot. Lots of other craziness happened, too, but let's concentrate on the AFOs for this post.

We saw Dr. Jordan on a Friday, where, again, he was remarkably insightful about Malachi's issues. Then — I suppose because it was running into his lunch hour? — he started telling me funny stories about the time when he worked on Hilary Clinton's health care bill and couldn't stand Al Gore so Bill Clinton had to call him up and plead with him to come back.

And I'm sitting there like: "Seriously? Is this the sort of world you live in?"

Anyway, because of all the surgery stuff we didn't expect to actually be able to get AFOs during that trip, but in their casual, "everything is possible" sort of way, Dr. Jordan and Mike Smith just went ahead and had them ready for us by Wednesday. 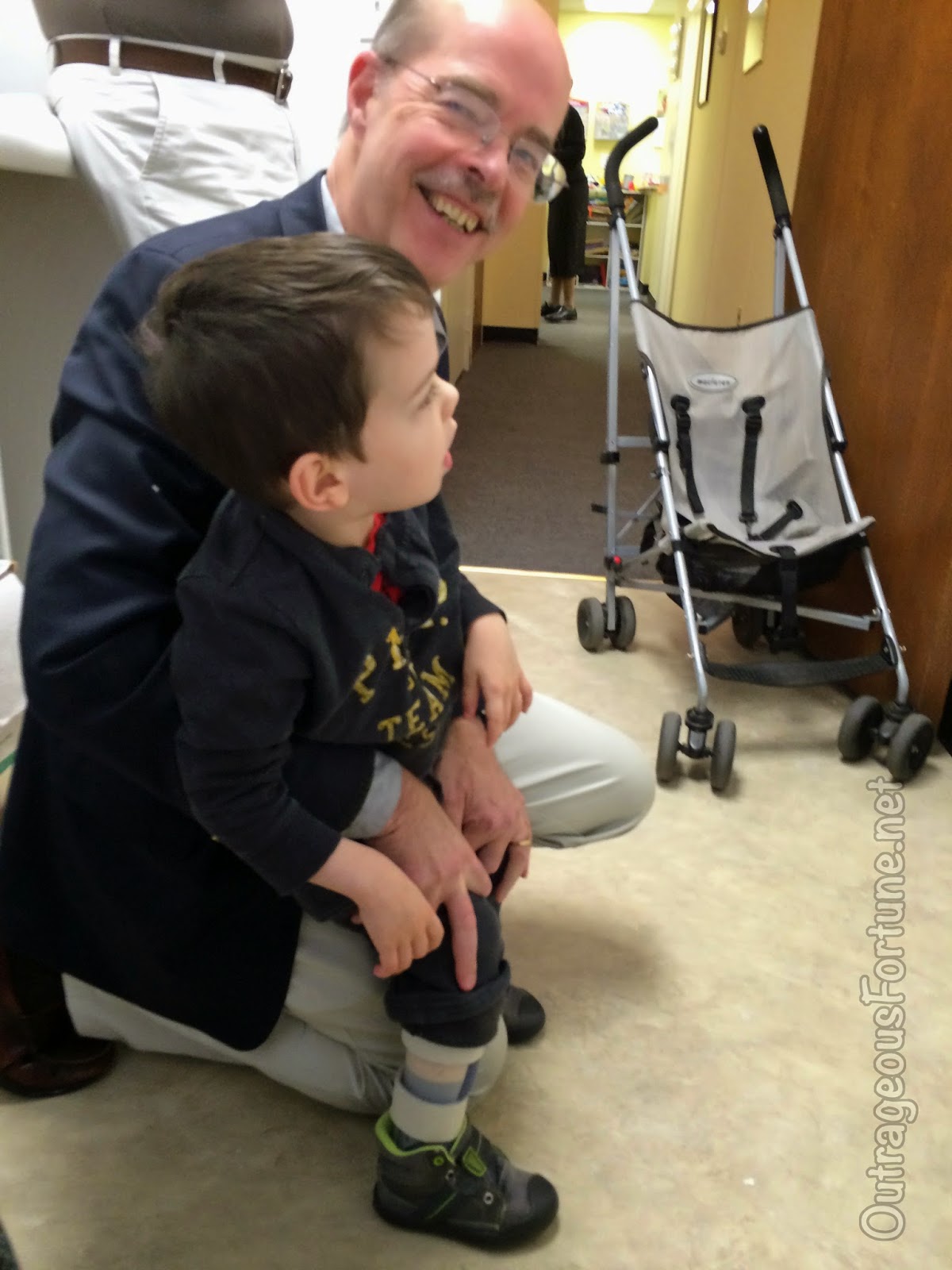 On Thursday, we had the surgery and the added bonus of having the AFOs was that Malachi could wear them instead of plaster casts while his muscles healed.

Our new AFOs are light and flexible and completely molded to Malachi's foot. You can see in the picture below that they have soft, flexible Velcro, light padding and a strong carbon-fiber strip along the Achilles tendon. They fit comfortably inside the shoes Malachi wore to the appointment. They last for two shoe sizes or about 18-24 months. The hard plastic is flexible enough to bend forward — for example, if he were to crouch — but rigid enough to prevent hyperflexion of the knee joint. Just like any article of clothing, Malachi is annoyed when we have to put them on, but once they are on he does not mind the AFOs at all. 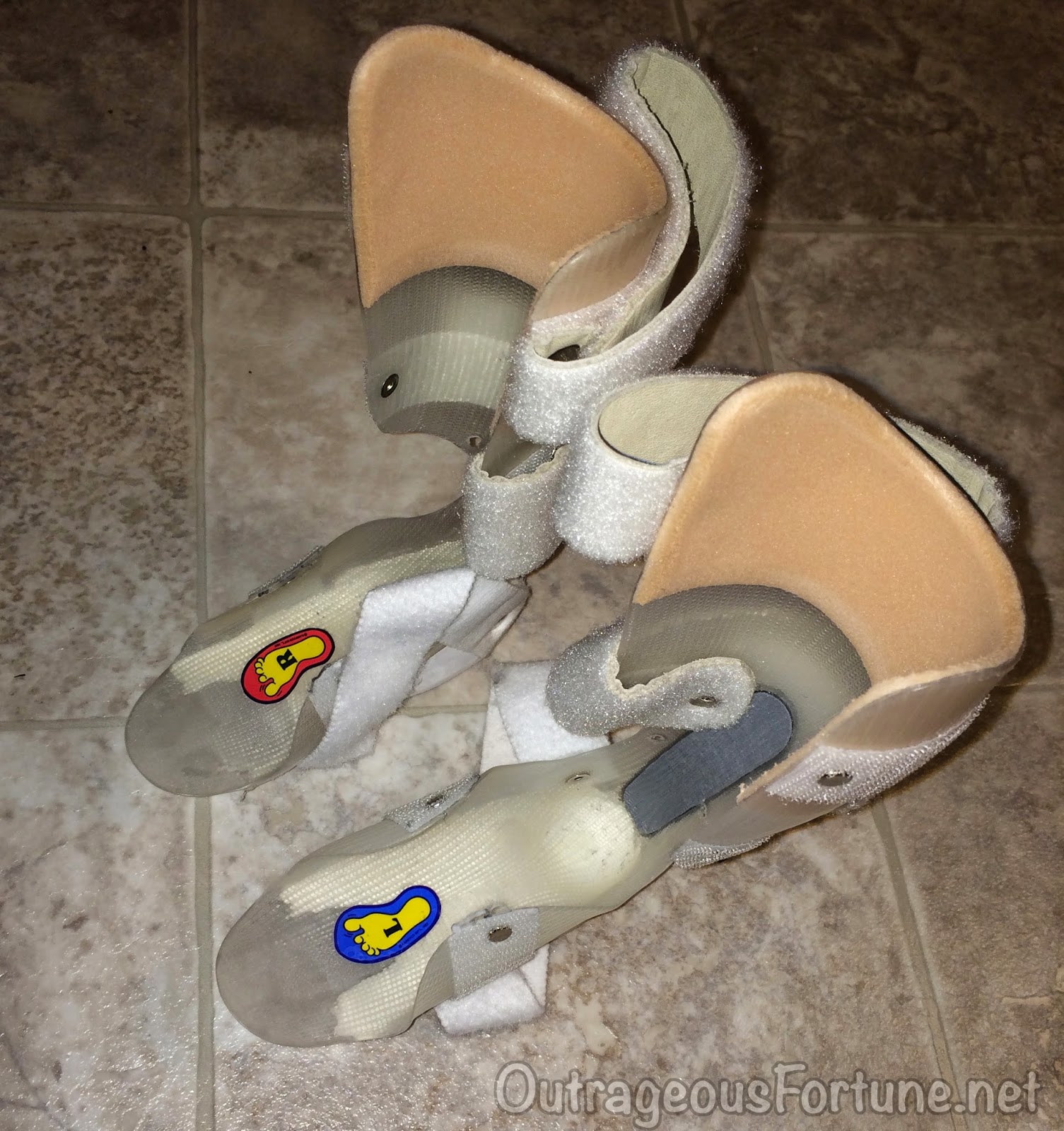 So! That is the story of our fancy new AFOs. I think I covered everything, leave me a comment here or on Facebook if you have a question!

Oh, and just to answer one question that I know will come up: these bad boys cost us $2,700, of which we hope and expect our insurance to reimburse us 60 percent. Your results may vary.