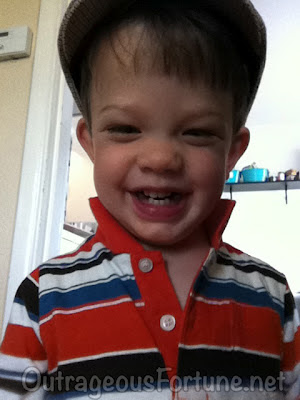 For those of you who don't know already or haven't heard me talk about it before, scientists say that before a child turns 2 years old, their brain is the most plastic it will ever be — change can occur more rapidly and more completely than at any other time in their life.

I wonder if this means that the glacially slow pace of Malachi's gross motor development will slow even further.

For the past two years I tried to keep open the possibility that Malachi would never walk. But especially in the beginning, whenever I talked or wrote about that idea, it seemed willfully pessimistic. Stop being dramatic, a little voice said, of course Malachi will walk someday.

But now he is 2 years old and he can barely roll over. He cannot crawl on all fours, he cannot sit by himself, he cannot stand up by himself. Conventional wisdom says because of this, he will most likely never walk. And you know what? When I look at how easily he startles, when I see how his entire body tenses uncontrollably when he talks about something exciting, I know in my heart, they're probably right.

I've worked really hard these last two years, but part of me wonders — and will always wonder — if I haven't worked hard enough. Unlike other special needs moms, I hardly ever do "exercises" with Malachi — all of our therapy is integrated into our lives. I think about CP constantly, as if I am trying to outwit it, but I don't force Malachi to do repetitive tasks or push him to stand or walk in strange contraptions. Maybe that makes me a bad mom. I really wonder sometimes.

Instead I've thrown my lot in with the Anat Baniel Method. Some of you might wonder why I'm so convinced that it works that I'm willing to tap out our savings and fundraise for it if Malachi isn't actually doing that great. I'll be honest with you: I wonder that, too. But as I roll over the evidence and theories around in my head — all day, everyday — I always come back to the same conclusion: It's the best method we've found. Even our private physical therapists have been really impressed with Malachi's progress and said to keep doing what we're doing.

So I can — and do — beat myself up about coulda-shoulda-woulda, but today I realized something that gave me a strange amount of comfort:

I haven't made him any worse.

Short of causing brain damage, nothing a mom can do can prevent her child from walking if he is capable of it — and I'm sure some desperate moms of toddlers out there have wished there were something they could do. Just because mine is so far behind doesn't mean I've been terrible, it means he was never going to by now anyway. All I can do is add to his abilities to a greater or lesser degree; I can't subtract from them.

So maybe this is good. Ok, fine. He's two years old. Now I know what the baseline is. Like I said last year, at least now I know what his CP is: It's pretty severe. Now I can readjust my expectations and start focusing on achievable goals.

But don't be surprised if I'm still hoping Malachi will prove that "conventional wisdom" wrong. 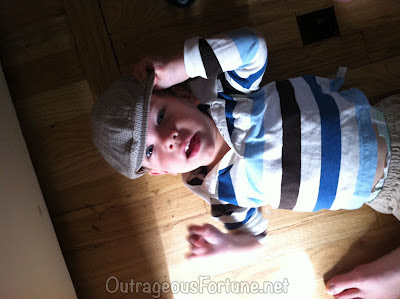 There are MERE HOURS left in our Kickstarter campaign to publish the beautiful children's book Dark & Light and we are SO CLOSE to our $10,000 goal. All profits from the sale of Dark & Light will go to Malachi's medical care in perpetuity, minus 10 percent to a special fund for other special needs children. Win-win-win! Go get your copy!
Email Post
Labels: birthday cerebral palsy Malachi motherhood parenting