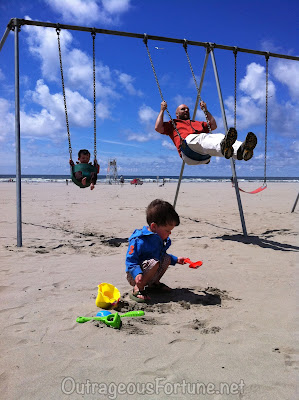 The past few days have been simply incredible. I mentioned on Monday how sad I was that the twins were turning two as it was a reminder of how very slow Malachi's gross motor development has been.

As it turned out, Tuesday, their birthday, was the best day we've had in a very long time. 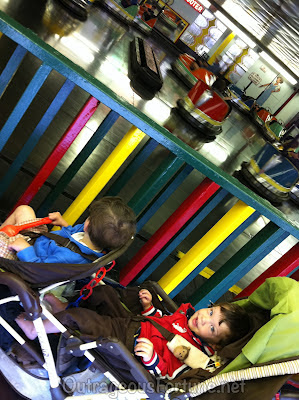 We met my husband for lunch but he surprised us by taking the rest of the day off. It took some convincing, but I eventually persuaded him that we should blow off all our commitments, throw caution to the wind and drive to Seaside, a little more than an hour away.

While raining in the valley, the Oregon coast was atypically sunshiny and beautiful. The boys adored playing in the sand. JJ liked digging with his new shovel set while Malachi couldn't get enough of the waves washing over his feet. Neither could he get enough of the carousel rides — though JJ was terrified of the carousel and even cried through Malachi's second ride! Perhaps it's because JJ is used to being able to move on his own and is scared of things that move for him, while Malachi is used to it. Or maybe, for no particular reason, Malachi is just a little bit more brave when faced with the unknown.

As we returned from the coast — both boys babbling a hundred miles an hour and NOT sleeping as I had hoped — my thoughts turned to all the commitments I'd blown off. That morning, The Oregonian's parenting blog ran a Q&A with me that I hadn't told my Kickstarter or blogging communities about. And speaking of Kickstarter, it was the final day of our campaign and I hadn't done a thing to get the word out about needing to make our $10,000 goal.

I needn't have worried.

Coming back into cell phone coverage, we discovered how our friends had — entirely of their own volition — taken up the cause on Twitter and Facebook. By the time we woke up the next morning, we had made our goal, and then some. 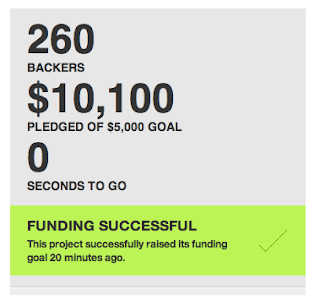 I feel so blessed and honored to have been at the focal point of a community coming together. I am so grateful to every single one of those 260 backers and the many others who retweeted or shared our campaign on Facebook or otherwise. Even more than that eye-popping $10,100 figure, this is what I will treasure most about this campaign:

Nearly 800 people — real, individual people like you and me — "liked" our campaign. This is just incredible that so many people wish us well and want us to succeed.

Dark & Light will become a reality thanks to you and today a new chapter opens in our lives. A chapter filled with joy, success and freedom.

....Oh, and one more thing. Remember that beach trip? Yeah, here's Malachi sitting up ALL BY HIMSELF, like it's no big deal. 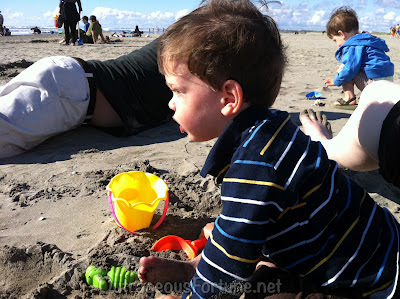 Guess whose mama is looking to get him a sandbox this summer?
Email Post
Labels: birthday Dark/Light kickstarter milestones