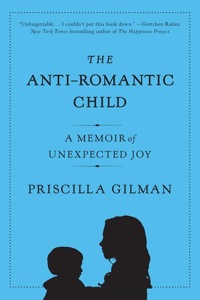 Let's make this short because it's 10 p.m. and my kids are inexplicably still awake and I'm grumpy and I haven't been able to bring myself to write this post until now.

I was asked to review "The Anti-Romantic Child" by Priscilla Gilman.

I'm sorry to say it was not my cup of tea.

Like Laura Shapiro Kramer's "Uncommon Voyage," this was a memoir from a privileged East Coast mother of a child with special needs. I'm trying to figure out why I liked "Uncommon Voyage" and I didn't particularly enjoy "The Anti-Romantic Child." I think it's because Kramer's son's condition seemed so similar to my own son's. Also, Kramer focused much more on alternative treatments and what new insights those brought to her life. Gilman's focus instead was to take every opportunity to weave in lines of Wordsworthian poetry to her narrative, an effect many people found charming but I often found pretentious.

I guess I just don't like that sort of poetry.

Gilman talks about her journey as the mother of two children, one with a disability called hyperlexia. At least, I think so. Gilman doesn't actually mention that term until p. 84 and then occasionally references other issues and diagnoses that seem to have little relation. It's possible her point is that her son is unique and she doesn't need labels to relate to him — which is a wonderful idea but since she doesn't make that explicit, it leaves me, the reader, confused as to what exactly is going on. Her son Benjamin's main symptoms are that he reads much too well for a child his age and he has trouble responding appropriately to questions, though these abnormalities seemed to improve rapidly and dramatically with intervention. At no point that I saw did Gilman acknowledge how relatively mild her child's challenges are in the world of special needs. In fact, on p. 97 she confessed a fear that Vassar might not hire her because she had a child with a "severe" disability.

What Gilman does do a wonderful job at is juxtaposing her romantic ideals with the realities of motherhood. Much like "Uncommon Voyage," I found it cathartic to hear some of my own feelings echoed in the experiences of another mother. But, ultimately, as a stay-at-home mom struggling to make ends meet with two 2-year-olds, one of whom can't even crawl, I found trouble relating to many of her struggles as a well-to-do New York City daughter, Yale doctoral student and Vassar college professor whose children can walk, talk and interact relatively seamlessly with the world around them, albeit with a few quirks.

I have no doubt that other people will enjoy this book immensely, but like I said, it just wasn't my cup of tea.


I received a free copy of The Anti-Romantic Child as part of a blog tour in exchange for my honest review. Feel free to check out the other posts on the tour as many of them had much nicer things to say about the book than I did.


Our Kickstarter campaign is so close to our goal! I'm so grateful to all of our 127 backers for joining together to make something awesome happen. Don't you want to join them? A minimum pledge is just $1!
Email Post
Labels: disability issues hyperlexia review