A New Age of Fatherhood?

I was lying on a park bench, watching the pale, fluid light behind my eyelids. My toddlers were across a playground full of dangerous equipment, but I didn't need to watch them. They were in the company of an imposing-looking man with a thick beard — their father. 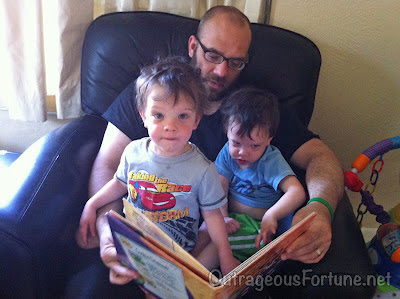 "How about the swings?" said one father, exiting a vehicle. "Swings first and then we'll come back for the slide later."

"Oh, I don't know if I could beat you in a race," said another pedaling alongside his elementary-school-aged daughter.

"Jelerhitomangaba," or something to that effect, said another in a language I couldn't understand.

Lying there, relieved of the duties of motherhood for a moment, I was suddenly overwhelmed at the notion that all of these children had positive, healthy and regular interactions with their fathers. The very fact that these father-child conversations were so casual and mundane suddenly seemed extraordinary. I wondered if this had ever been as true in American history as it is today.

To be sure, fatherless homes are FAR more prevalent today than ever. According to the National Fatherhood Initiative, 33 percent of American children live without fathers compared to just 11 percent in 1960. (That figure jumps to 64 percent, by the way, in African American households. Ouch.)

This is incredibly sad not just for those kids, but for society as a whole. Statistics from that same group show a truly staggering array of issues that arise when fathers are absent.

But, keep in mind that in these days of increased feminine power and status, it is not always the father's fault or decision that he is not in the home. Also keep in mind that statistics like these don't tell the whole story, like marriages in the war years when fathers were absent for long periods of time but still considered "in the home."

So, while statistics are great at showing quantitative values, they aren't real good for qualitative ones. Nothing I found could show how much better of a job the fathers who stick around are doing in relating to their children and taking on more household duties.

I guess it's just a sense I get from the flyers I see for fathers groups and the men I see pushing strollers and the proliferation of fatherhood books in the bookstore. Those of you who were alive more than 30 years ago, correct me if I'm wrong, but these things feel like a very new shift in fatherhood. It seems to me that today's men are forging new trails, smashing stereotypes and often doing the enormously difficult work of overcoming in-grained patterning from their own absentee, abusive or negligent fathers.

This is not new to their generation — my father and father-in-law are both wonderfully calm and supportive, despite having a less-than-ideal examples set for them by their fathers. But looking around at the men in my circle of friends, I do think that these days more than ever engaged and committed fatherhood is the rule, not the exception.

Much like mothers, today's fathers may not always love being around their kids, nor changing their entire lives to revolve around them. But the difference these days is that fewer of them see it as an option.

Psst.... Have you gotten your copy of Dark & Light: A love story for babies yet?