Suggestion: Press play to listen to the song while you read this.

It was one of those mundane moments when everything just hits you.

I've had lots of those moments in the past two years and most of them were not good. Like at the twins' second birthday party when JJ and a boy about his age were running through the house, giggling nonstop, and I realized with a deep ache: "This is what having normal twins would have been like."

Or the time when I sat and listened to two mothers discussing immediate post-partum experiences and realized that — despite having had two children — much of the information they shared was new to me. Since my kids had been in the NICU for six weeks after their birth, I couldn't even think of a single thing I could contribute to the conversation that they wouldn't find frightening or at the least pretty awkward.

But today was different. Today, I got an e-mail from the printer for my new children's book Dark & Light: A Love Story in Black and White with this picture: 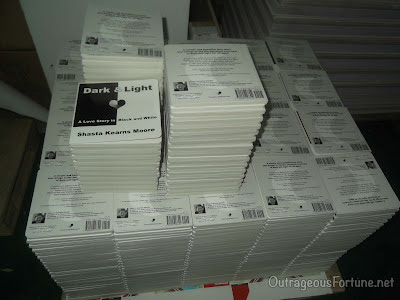 Wow. There is something just so exhilarating about seeing so many copies of my book. Perhaps you just see a boring shot of a pallet of grayish books, but when I look at this picture, somehow my bones feel longer and lighter and my heart quickens. This picture whispers to me: "I am an author. A real author." And, equally: "I finally have a long-term plan for Malachi's medical expenses."

But the demands of today didn't allow me to dwell for more than about a minute on this picture. There was another therapy trip to California to pack for and children to feed and errands to run. Semi-typical mom stuff.

So it wasn't until this afternoon when I was folding laundry that the mundanity-induced moment of clarity hit me. The autumn sunlight shown through my living room curtains onto the beautiful brunette heads of my boys playing quietly together. Malachi was sitting remarkably well in his Bumbo chair while JJ sat next to him on the floor. Suddenly I had a flash of the first time I put Malachi in the Bumbo chair when he was a few months old and how he slumped over to the side instead of sitting up straight  like JJ had. It was the first time that I could really see that Malachi was disabled and I cried for a long time. I thought of how uncertain and terrifying everything seemed back then and how some (though not all) of my worst fears have now been laid to rest. I rejoiced in how much easier things are now than they were then and how much I've learned and how far we've come. In that moment, the present was truly OK and the future seemed bright and manageable.

As I silently beamed at this really rather boring scene, over the radio The Beatles jammed: