The politics of special needs blogging 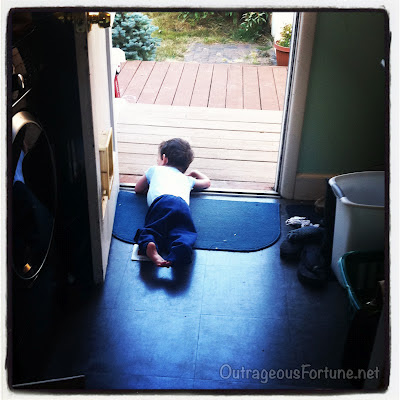 Lately I've been having a hard time blogging. I've chalked it up to being ridiculously busy, which I am, but I think it's more than that. I've always been busy, but blogging was my stress release — not another chore, but something that gave me energy. Over the last few months, that's become not as true and I think I know why.

When I first started, I was mostly talking about my pain and my process and the new information I was learning as I entered this Brave New Special Needs World.

But even though the pain is still with me every single day, even I'm sick of talking about it. This leaves as one of my primary subjects the Anat Baniel Method, which is our primary form of treatment for Malachi. I like the method, but it's hardly perfect and if I say negative things about it, somebody on the 400-person forum I started might call me out. And if I say positive things about it, I risk alienating friends who have chosen the traditional route.

Even though a blogging friend of mine recently pointed out how great it is that special needs moms can freely celebrate each other's kids' accomplishments and are therefore out of the traditional Mommy Wars, there is an aspect of special needs motherhood in which this is really not true. The path that we have each chosen to help our kids achieve their personal best is so entwined with all the pain and loss and anger of the diagnosis, that talking about our choice of therapies can raise hackles or send someone into a quiet depression.

I have never been afraid to speak my mind, regardless of social restrictions like these, but it does turn writing about my life into work and right now, I have about all the work I can handle.

There are other things going on in my life that I would ordinarily be open about except that they involve a dramatic shift in our financial situation, which includes but is not limited to the Kickstarter campaign for Dark & Light: A Love Story in Black and White. Money is always a tricky subject. But I feel like I'm starting to have to commit lies of omission whenever I talk and I'm getting tired of it. I hate lying in all forms, even lies of omission, and even though some would say I don't owe you guys an explanation, I feel like full honesty is the least I can do for the kindnesses you've shown me. And I think the vast majority of you would be happy for us about these things, but I still worry that someone will begrudge us our good fortune.

Regardless, I've opened the can of worms now, so I guess I should tell you what I'm talking about. Remember how bad our car situation used to be? Well, about a month ago we financed a sleek and sexy 2009 Mazda 5. It's like a mini-minivan. It's got rolling doors and a third row of seating — which if folded down provides plenty of trunk space for all of our various accoutrements — but it's a small enough vehicle that it still gets pretty good gas mileage. And there's all these little things that are so much better than the 1995 Corolla we've been limping along with, like an auxiliary port for our iPhones, a self-adjusting heater/air-conditioning system, and warning lights that only come on when something is actually wrong. The wonders of modern engineering!

We thought very deeply about this car purchase and weighed all the factors, but eventually decided that this option was best as it offered the most value and would meet our needs for a long time to come. I hope I don't need to say what follows, but I will: absolutely no money from the Kickstarter campaign was, is, or will ever be used for this car.

Which leads me to Dark & Light. I have been spending the vast majority of my free time setting up my new publishing business, S. K. M. Publishing, in order to create a long-term source of income for Malachi's therapies. Since I don't physically have any of the books yet, I haven't "sold" any of them and therefore I haven't taken any profits.

So, you might be wondering, how are we affording all of these trips to the ABM Center in California? Well... get ready for a shock.

After the Huffington Post article came out on us, a man I have never met before contacted me and said he was touched by our story and wanted to help. He has helped out several other families with children with CP and he was wondering if he could help us. His only request is that he remains anonymous and in the background, so I won't talk about him much except to say he has dramatically altered our ability to pay for Malachi's treatments. I call him, with all seriousness, our Guardian Angel and he has revolutionized the way I see charitable giving. Now that you at least know he exists, I hope to be able to talk more openly about the insights he's given me.

And that's really why I'm writing this post and divulging all of these secrets. Because I do have posts inside me just bursting to come out but I couldn't talk about them freely with all of this baggage hanging around.