The Return to a Normal
That Never Was

As I pedaled my way past house after house in the sub-development of cookie-cutter houses, a deep sense of longing settled into my chest. Not for the size of the houses, which were at least three times the size of ours, nor even for the relative opulence of their upper-middle-class trappings casually strewn about: cars, basketball hoops, etc. No, the longing I felt came when, on our family bike ride, we passed the open doors of garages with tools hung up neatly on white peg boards and plenty of open room for cars to park on gleaming concrete surfaces. I longed for that much order in my life, to have a garage that wasn't dark, dank and cluttered with years of items I have been too busy to properly organize and store.

They must have really boring lives to be able to spend so much time on their garages, I thought bitterly.

I tried to bolster myself with this thought and march on. But when my husband left with Malachi for another therapy trip to San Rafael, I decided to spend the week's worth of spare time cleaning out our garage.

It took me less than a day. Good grief taking care of only one typically functioning kid is easy!! JJ calmly followed me around and played with stuff as I sorted through the garage. Once, I heard him coming up behind me repeating a genuine question in his tiny voice: "A... hat? A hat? A hat?" I turned around and saw he had placed an old dusty wheelbarrow tire on his head and, yeah, it did look sort of like a hat.

By Wednesday of last week, my house was reorganized and spotless and I had regained some self-respect about my housekeeping skills. I started to turn my attention to our severely neglected front yard, but stopped myself.

Maybe I could have a little fun? So JJ and I went to the zoo and the children's museum without the encumbrance of a stroller. We ate out at restaurants without a care because he can sit in the chairs and eat everything on the menu. The world was suited to us, designed for us.

I took artsy-fartsy pictures of JJ, which I discovered is much more difficult than taking pictures of his brother because he moves around so damn much. 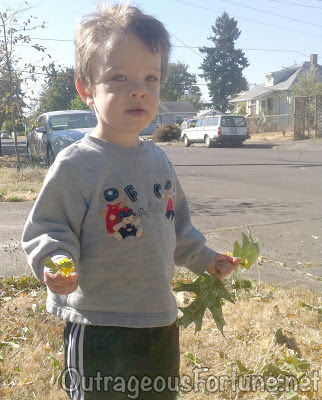 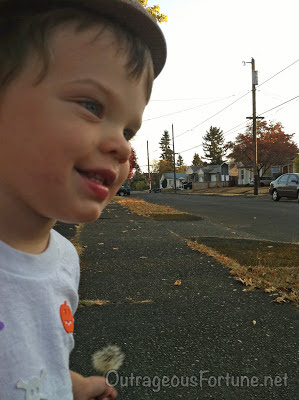 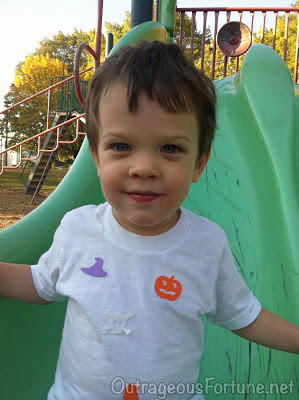 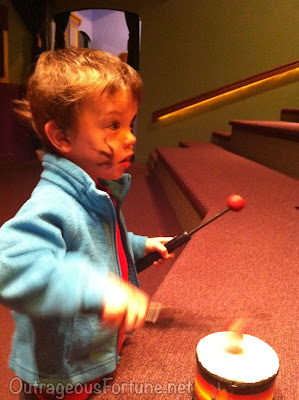 Life was so easy and we having so much fun that I began to worry how I would feel when Malachi returned. This was the life I thought I would lead: the one with only one kid. The one that was carefree. The one that allowed me to organize my life into the shapes that I found pleasing.

During our last day of this freedom, I took JJ to a movie theater's "mommy matinee." Like walking around and eating out, this is something we can't do very well with Malachi. He is terrified of anything dangerous or sudden, and movies with even a modicum of plot contain a lot of danger and suddenness.

But it turns out that JJ doesn't like movies with plot either. I guess I never noticed when I was distracted by Malachi's crying. After 10 minutes he was pleading with me to leave, so we abandoned the idea and went to a nearby park.

At the park (where I got to actually sit on a park bench instead of facilitating play) were identical twin boys, only a few months older than mine. I felt the familiar pangs of jealousy as I watched them play together and eat a snack together.  But it wasn't until I took this photo that I realized I wasn't jealous of their mother, with what I presumed to be her relatively easier existence, I was jealous of the boys. 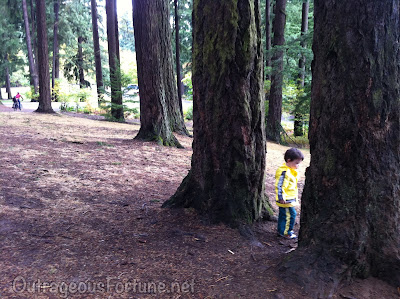 JJ looked so alone that I began to realize the longing I was feeling was for his brother's companionship. Not a brother who could walk, or eat or do anything exactly like he can, but just a brother. JJ had been an only child for a week, but he was never destined to be an only child. He was always, always going to have a brother.

We returned home and as I looked around, I discovered that, in the days since Wednesday, the house had slipped back into its usual state of clutter. I went out to put something in the garage and even it didn't look nearly as clean as I thought it had before.

That was when I realized, this was my normal. That "normal" life I thought would have, the one with one typical kid, a tidy house and time to go on outings, that never was and never will be and I guess I don't really want it. This normal, the one I live every day, it's not perfect and it's not necessarily happy, but it is where I feel most comfortable. It's mine.

And, hey, at least it's not boring.