A day in our life

Friday was a strangely significant day full of growth, new beginnings and development. None of these were huge by any means, but they were mileposts on the highway of life and I thought it would be fun to note them all. It's amazing how quickly we forget what daily life is like and how quickly children — even special needs children — grow at this age.
(The times are approximations, but I think it makes this fun, so just play along.)


6:45 a.m.: Malachi wakes up and simply says "Mama." It's one of the most beautiful ways I have ever been woken up. I go get him and bring him into my bed for snuggles.

6:48 a.m.: Jaden wakes up and starts screaming rather less beautifully. I wait a little bit then go get him and bring him into bed so he can crawl around and pester the cat.

7:02 a.m.: We get up and my husband plays with the kids on the floor while I attempt to make us breakfast.

7:05 a.m.: Malachi army-crawls (belly dragging) several feet on the floor for the second time in his life. He rolls over to his back as soon as we think to take out our cameras.

7:13 a.m.: We discover why storing the broom next to the stove is a bad idea when Jaden goes to grab it (he loves sweeping) and nearly spills a pan of sizzling bacon on his head.

7:40 a.m.: Malachi confirms my suspicion from the night before that he has learned the word "on" by using it repeatedly with a light-up book. This makes it one of his first non-object words, a significant cognitive step.

8:09 a.m.: I try to fold some laundry. Jaden wraps pajamas around his neck, but they keep falling off and he gets mad. I pile them on his head. He walks around like this until they fall off and then runs back to me screaming and clearly demanding that I put pajamas on his head again.

8:41 a.m.: We go outside to discover it is the first true day of spring. It was actually SUNNY and WARM in OREGON in MARCH. I wore flip-flops all day. We got to turn the heat off inside and go play outside. My neighbor's daffodils that I noticed pushing up from the ground two days ago have blooms. The world is beautiful.

8:54 a.m.: At the discount store, I ponder how I could possibly use a bag of six red onions when I only need one, while Jaden screams bloody murder about his desire to fondle and consume the entire nearby display of bananas. I decide that for $1.49 I will somehow find a use for the other five onions and continue on to buy a can of tuna... and a bunch of bananas.

10:07 a.m.: I drive to a playground that is way above Jaden's developmental level — he wants to climb into all sort of dangerous positions while I'm trying to save him and not drop Malachi — and we all have a terrifically horrible time while the other parents wonder why on Earth I'm not standing back and just watching my kids play like they are.

10:20 a.m.: I abort the playground idea and head towards the wetland area of the park with boardwalk trails that Jaden delights in following.

11:23 a.m.: Back at home, I show Jaden what the whip-like cat toy is for and he finds it HILARIOUS to watch our otherwise lazy, old cat jump, twist and attack.

12:06 p.m.: Malachi demonstrates for the first time that he knows the sign for "different." So, I add peas, toast and grated cheese to their trays. The tuna is mostly ignored.

12:13 p.m.: During an apparently hilarious game of "put a finger in mom's mouth," I reciprocate and discover that Jaden has not one but THREE new teeth, which may explain the few nights of screaming awake several times and the constantly shoving fingers in his mouth. Although, really, he's been shoving fingers in his mouth ever since he realized he had fingers and he hasn't gotten any new teeth since about August. Malachi's gums are still fairly smooth — no doubt his will take longer since he doesn't bite as hard.

12:24 p.m.: I sing the female part of Gotye's "Somebody That I Used to Know." Both boys listen, staring at me in dazed silence. I finish and Jaden signs "again" for the first time in his life. I'm flattered and sing it again. He signs "again" again. I decide that looking into my sweet children's faces and singing: "Now and then I think of all the times you screwed me over," probably isn't the healthiest thing to do and refuse. Crying ensues.

12:37 p.m.: Malachi demonstrates for the first time to me that he knows the sign "all done."

12:41 p.m.: I discover why having a dish-drying towel on the counter is a bad idea when Jaden gives it a yank and a wine glass shatters on the floor.

12:41 p.m. and two seconds: He attempts to clean up said wine glass shards.

12:42 p.m.: After securing Jaden in the living room, I meticulously pick through, shake off and clean all the toys, books and plasticware that were on the floor and sweep the floor three times to make sure all the broken glass is gone. Did I mention I wore flip-flops today?

12:55 p.m.: I give Malachi his noontime bottle, which he still needs for nourishment. Jaden climbs into his nighttime bottle spot on the couch and is angry when I don't come to give him his decoy bottle of two ounces of cold milk (he won't really drink it if it's cold but it saves me from listening to him scream the whole time Malachi gets his).

12:56 p.m.: Jaden stomps over to get his milk and wanders back into the living room. I tell him repeatedly that he needs to "stay in the kitchen" and though he comes back momentarily, he then starts edging further away each time I call his name as if I'm playing a game. To make it clear to him that I'm not playing a game, I take the bottle away. He cries — full on tears streaming down his face — while I wait and then explain that he needs to "stay in the kitchen."

12:57 p.m.: Still sobbing, Jaden wanders back to the living room and tries pathetically to clamber back to his nighttime bottle-drinking spot on the couch — clearly bewildered at the request I'm making of him. I take pity and bring him back to his high chair and give him the bottle. Everyone is happy.

3:52 p.m.: We go to the Rhodedenron Garden where Jaden is extremely excited about showing off his new word: Duck.

3:58 p.m.: I have to tear him away from the first pair of ducks with promises of more ducks just on the other side of a bridge. After tears and some thrashing, he decides to trust me, signing "more" and then running off in that direction.

3:59 p.m.: He stands stock still in amazement at the dozens of pairs of ducks and geese in the pond.

Jaden: "DUCKS!"
Me: "Yes, ducks! Look at that one, see how pretty its wings are? Those are 'wings' that it's flapping. And look, there's a brown one. She's a girl duck. And the one with the green head is a boy duck. Do you see the girl and the boy duck?"
Jaden: "DUCK!"
Me: "Yep, that's right. And see those bigger ones over there? Those are geese. The big ones are geese. Very pretty, huh? Geese. Stay away from them though, because they can get mean."
Jaden: "DUCKS!"
Me: "Not exactly, those are geese. Do you remember from our book? Goose."
(The book with the goose in it is in Japanese so I switch to Japanese:)
"日本語 で 「がちょう.」 がちょう は 「があ, があ, があ」 って."

Sigh. Well, at least I can tell people he's a Duck fan. 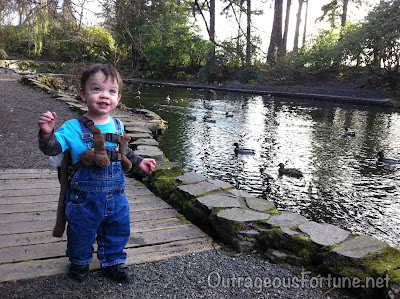 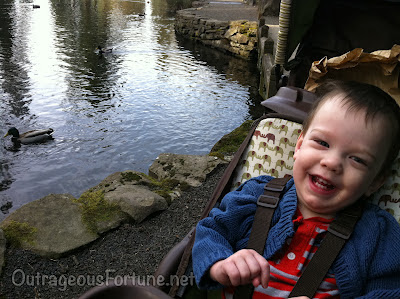 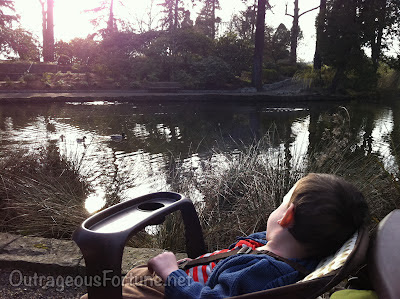 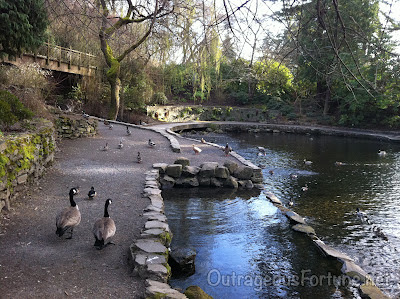 4:24 p.m.: We stop for a snack and Malachi eats a quarter of a banana that my husband feeds him right out of the peel. We usually have to mash it up for him. We remark on how well he's doing lately.

7:37 p.m.: My husband makes this beautiful and strangely calming video of Malachi's face in the bath. It's like watching a campfire.


7:42 p.m.: Jaden finally gets his nighttime bottle in his special spot on the couch.