Why does modern medicine throw out our brains? 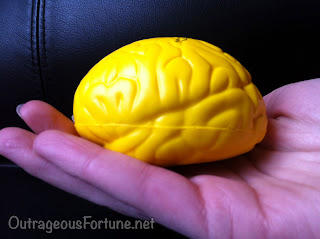 It is said that during the mummification process, ancient Egyptians embalmed the organs of their dead leaders in clay jars in their tombs. All of the organs, like the heart, the liver and the stomach.

All of them, except the brain, which they removed through the nostril and threw away.

They didn't think it was important.

Today, we laugh at those ancient masters. How could the brain not be important? The organ that controls all the other organs? The center of our thoughts, emotions, personality, knowledge, memories, the very essence of who we are? The indicator, even, of whether or not a person is alive?

But the more I have dealt with the medical establishment in the last two years the more I feel that modern-day doctors are not that far off from those ancients. It is simply astounding to me how little they take into account their patients' thoughts and emotions, let alone their brain's ability to control the rest of their body.

This despite the fact that nearly every major medical study ever created has PROVEN the ability of a person's brain to heal the body all by itself. In fact, up to 60 percent of the time simply telling a person that they will get better as a result of a treatment — without actually treating them — makes them better.  This truly awe-inspiring capacity has been sneered at as the "Placebo Effect" and brushed aside for more "real" results instead of studied further and harnessed.

It has been thrown away.

This is dismissive attitude towards the brain has been made increasingly clear to me in my interactions with Malachi's traditional doctors and therapists. They talk all the time about Malachi's muscles as if he has a muscular disorder and not a brain disorder. They don't seem to really understand that it is within his capacity to control his muscles or that aiding him in doing so is far more about teaching correct usage than forcing it, as through standers, gait trainers, ankle-foot orthotics (AFOs) and the like.

It's not just that I believe this philosophy is inefficient; I know personally how much harm it can cause not to take into account the human brain's remarkable capacity to control its body.

When doctors told me through a series of intensely shocking and frightening conversations that at five months pregnant I was not only having twins but that they might arrive very soon and therefore die, my brain went into panic mode and I started having minor contractions right there. I was immediately admitted to Labor and Delivery. It wasn't until I left the hospital against doctor's orders that I started feeling much better, and indeed when I returned to the hospital the next morning, my cervix was back to a normal length. This wasn't good enough for them, though, and they continued to outline their doomsday conjectures.

It wasn't until I started researching prematurity in twins that I discovered that the only factor proven to contribute to premature birth in otherwise healthy pregnancies — which mine was — is stress on the mother. Stress. On. The. Mother.

This is all psychological mumbo-jumbo to the medical and courts system, otherwise I might sue them for the harms they caused to me and my sons — most notably the damage to Malachi's brain as a result of his prematurity. But, no, they would take one look at it and say, "They told you you would have premature babies, and you did. Case closed."

But imagine how the scenario could have gone if doctors had taken into account my brain and the psychological harm they were inflicting upon me? I am not saying that they should have lied to me or even withheld information, but they could have told me in a much less terrifying way. They could have supported me emotionally and psychologically. Instead of telling me there was nothing they or I could do, they could have stressed that my brain had the capacity to control my uterus, which is true, and that I did in fact have not only the odds but the power to carry my babies to term, which I did. Instead of turning a pregnant woman who felt perfectly healthy into a house-bound invalid for two months, they could have prescribed massage, meditation, or other relaxation techniques and simple recipes for a nourishing diet. Instead of psychologically chaining me to a bed in a hospital for two weeks where a person in a uniform would come in every four hours day or night to wake me up and remind me that I was in an incredibly stressful and life-threatening situation, they could have allowed me my sleep and empowered my soul.

They could have tapped into the potential of my brain.