Note: The following review assumes you've heard of the Anat Baniel Method (ABM). It is the primary methodology we use with Malachi and we've found it to be very compelling, though we are not without criticisms. If you follow the linked text above, you can read everything I've written on the subject. 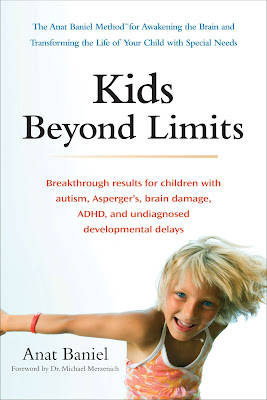 So, I had very much hoped that I would have finished reading Anat Baniel's new book Kids Beyond Limits: The Anat Baniel Method for Awakening the Brain and Transforming the Life of Your Child With Special Needs

by today, its release date, but I have to admit that I haven't. I've read most of it and skimmed through the rest.

I received an advance copy to review about a month ago and the bottom line is that I absolutely love it. But even though the book is short, only 288 pages, it has taken me an incredibly long time to read it. That's because it's just packed with things that, well, kinda blow my mind. I've found I have to put the book down at least every chapter to think about how I can integrate its philosophy into my life and the way I deal with Malachi. And I definitely can't read it before bed or I will be up all night thinking about it.

So it's been slow going. But I know for a fact I will read it through again as soon as I finish. And I will make everyone who interacts with Malachi read it. And, if I can, all of you people read it.

If you happen to have read Anat Baniel's first book, Move into Life: The Nine Essentials for Lifelong Vitality

, you already know her so-called Nine Essentials: Movement with Attention, The Learning Switch, Subtlety, Variation, Slow, Enthusiasm, Flexible Goals, Imagination and Awareness. These are also the basis of her new book, but I found Kids Beyond Limits to have much more practical advice, useful anecdotes and personal insights. It also seems to reference many more scientific studies than I recall from Move Into Life, and has extensive footnotes. For anyone who enjoyed Norman Doidge's The Brain That Changes Itself: Stories of Personal Triumph from the Frontiers of Brain Science

, I would consider this a practical guide to that inspiring round-up of neuroplasticity success stories.

For others, the titles of the Nine Essentials alone might be enough to help them remember what to do in their daily interactions with kids. But for me, I've found more success with pulling out some key phrases that I repeat to myself as I interact with Malachi. Here are a few:


What is obvious to me is not obvious to him. Parents know instinctually that this is true in certain cases. For example, just about everyone would know to keep a newly crawling baby away from ledges. Even though the consequences of gravity are obvious to everyone else, the baby has not yet learned this. Baniel takes this concept a step further and shows how kids — all kids, but particularly those with special needs — are not aware of things that we consider to be obvious and this is the source of much of their dysfunction. For my son, this means that even though he arches his back all the time, he might not actually be aware that that is what he is doing and that it prevents him from accomplishing things like rolling over. So, I've started to play a game with him called "arch, flat, curl" where I playfully point out what he's doing and even accentuate it a little bit with my hands. This has very quickly taught him the difference between these states and he can now curl over to lay on his side pretty much whenever he wants to.

How can I "differentiate around the edges"? Baniel uses the phrase "differentiate around the edges" a lot and by it she means that you start with something the child can already do well and then see how you can build on that — slowly and incrementally. I'm finding this to be easiest to apply in my verbalizations. I have always babbled along with Malachi and Jaden, but now I can add in a slightly different vowel sound or play with my tongue a little more and see if they follow along. Very often, they do, and Malachi has even begun to push his tongue out the left side of his mouth, which he has never done before.

Sloooooow. OK, so this is just the title of one of the Nine Essentials, but it's very useful and easy if you can remember to do it. Just slow down. I take a few beats longer to turn the page, or wait a little longer after pointing to an object they know the word for or take 10 seconds to pick him up from the floor instead of five. What's the rush?

Require less evidence to be happy for his growth. Yes, I did just see Malachi's leg move in a way I haven't before. It's OK to be happy about that. I don't need to have him repeat it immediately to prove it to me and I don't need to keep those happy feelings in a penalty box in my head just in case he never makes that movement again. Neither do I need to wait to be happy until I see him incorporate that leg movement into rolling over. I saw him do it with my own two eyes and he's never done it before. That's enough.

Concentrate more on the process and less on the outcome. This one is really hard for me. Like, really, really, really hard. I'm constantly fighting back voices that say: "If there are no outcomes, what's the point?" But I feel like there is something very valuable there so I'm going to keep working at it. As Anat herself says, if she were required to directly "make" a child perform a certain way, she would have no idea how to do it. She just concentrates on improving their quality of movement and the rest takes care of itself.

Wonder what he'll do next. This one has been great and I've been really surprised and delighted at the results. Whenever I catch myself about to "help" him, I still my mind for a second and wonder, with rapt attention, what he'll do next. More often than not he does something useful or unexpected. For example, today, he was trying to roll onto his side to get a small toy car. He was straining and tensing his legs so much that he would never get fully onto his side. Normally, I would pick up his top leg and push it over towards where he wanted to go. This time I just watched for a second. Then, very gently, I poked his hip and wondered what would happen. Almost immediately, he brought both of his legs up and curled his body to get much closer to the toy car. I didn't even realize for a second or two that that was my desired outcome because I was so intent on simply observing. And the best part was that it came from him which — obviously, but it wasn't really obvious to me before! — is where all of his movements are ever going to come from.


So with all of these lessons and many more, is Malachi's progressing? Without a doubt, yes. In the month since I've gotten this book, Malachi has learned to roll onto his tummy and belly crawl a bit and he is also showing a lot more variety in movement and enjoyment in moving. I'm certain that this $10 book is more useful to me and Malachi than our $3,000+ trip to the Anat Baniel Method Center in San Rafael or at least that if we'd had it we would have gotten a whole lot more bang for our buck.

I would be lying if I said it's not difficult. I struggle with it everyday and still get overly frustrated with myself — and with him. I struggle with how to be discerning without being judgmental and I struggle with how I'm supposed to help him recognize useful actions without imposing on his creativity. There are also several things in the book that make me realize that many of my well-intentioned attitudes and actions towards Malachi (a big one being asking him to repeat his success) have had the complete opposite effect than the one I intended.

But the bottom line is that this approach makes me happier and by extension Malachi. The fact that it also works is almost icing on the cake.