My new release, 'A Twist of Fate,' realizes a lifelong dream

When I got pregnant, I imagined that I would have one, normal baby, take a year off from the rat race and write a book or two. Who knows, maybe I'd even make a fraction of the money J.K. Rowling did when she decided to do the exact same thing.

Alas, my reproductive system had other plans.

Despite all the trials and tribulations that came with those unforeseen plans, I did manage to carve out some "me" time — thanks in no small part to my husband — to write what became a 28,000-word novella.

(The story of three identical women from different corners of the world who find fulfillment after suddenly being switched into each other's lives came to me long before I was pregnant. But the irony of these characters being "identical triplets" was not lost on me.)

After briefly shopping the book around to a few agents, I decided to self-publish because I simply don't have time to climb that hill right now. This is not to say that the e-book you can purchase for your very own is poorly edited or formatted — I did take as much care as I possibly could with that, including a professionally designed cover.

So there it is, out there in the wide world for all and sundry to read. At the very least, I can cross "publish a novel(la)" off my bucket list. At the most, it'll go viral and some producer will agree with me and this anonymous commenter that it would make a really excellent Hollywood-Bollywood crossover film.

A girl can dream.

(Hrithik Roshan, call me. I promise not to drool on you. Much.)

In any event, I have always wanted to be a published author. Thanks to the magic of the Internet, now I can say — with a wink and a nod — that I am. 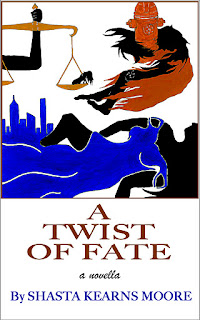