As you read this, you probably are wondering where my kids are right now and why I'm writing instead of taking care of them. Are they squalling on the floor being ignored? Have I thrown them out in the garage to get some quiet time? Do I even know where they are?

Well, the truth is, no, I don't actually know where they are right now. But I do know they are safe and loved and cared for and that is because I know who they are with: my husband.
My husband works all week and many weekends and when he has a day off, he usually spends it driving around town with the boys so that I can have a break to work on this blog and other writing projects. When he's not doing that, he's doing the dishes or any number of other projects I have set out for him. Sounds pretty cool, right? Ladies, don't you wish you had a guy like that? Well, too bad, 'cause his awesomeness is all mine. See? 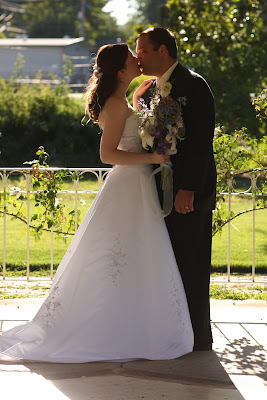 The trouble is, I am absolutely horrible at making him feel awesome. Oh sure, he knows I love him, but I'm just not nearly as good at praising him as I should be.
Of course, this is all society's fault, not mine. Obviously. Television and movie wives are constantly whining about their stupid, lazy husbands and my friends and I have followed suit, probably spending more time bitching about our male partners than it would have taken to do whatever task it was they didn't do ourselves. (But to be fair, I wouldn't be at all surprised if they've spent a similar amount of time complaining about our nagging.)
This knee-jerk spousal battle of the sexes is why I laughed when I saw this bumper sticker on a man's car:
I ♥ MY WIFE
I figured his wife put it on there as a joke or something. How silly, I thought, to drive around professing your love for your wife, instead of New York or Scottish Terriers or other things people typically ♥.
Then, of course, I realized it's not silly at all. If you're going to ♥ anything, it really ought to be your spouse, shouldn't it? I mean, if anything is worth putting on a bumper sticker, isn't your life's true love one of them?
It made me think of a friend I have who would tell me stories with a light in her eyes about wonderful things her husband had done — engraving her an award trophy just because or writing cute notes and leaving them where she'd find them. It took me several stories before I realized I kept waiting for a punchline that wasn't coming. I was so used to stories that followed the "my husband/boyfriend did the cutest thing... but then he totally screwed it up" formula. I wasn't quite sure how to respond to this "my husband is so cool, the end" formula.

I tried a few times to tell such stories, but, as any author knows, conflict is where the story is at, and I quickly forgot to simply celebrate the good times. Who wants to hear about how much I love how he mushes my butt like a pillow when he wants to lay on it to watch TV or the way he's never given up and asked me to feed Malachi when he's having trouble?
I mean, think about it. Am I going to tell you the story about how he and his brother took three loads of heavy yard debris to the dump? (Yay.) Or, am I going to tell you how I told him they shouldn't take the stroller on their hike together afterwards and then they did anyway and regretted it?
Of course I'm going to tell you about the stroller, because not only does it show how I'm always right but it has the added benefit of me being able to tell you that other hikers in this progressive part of the country assumed they were two gay dads with their adopted twins, which is hilarious and also something I predicted.
But both stories are true and I ought to choose the "my husband is awesome, the end" narrative much more often.
For his first Father's Day, tomorrow, I vow to do exactly that.
My husband is awesome.
The end.
Email Post
Labels: father's day husband