Ok, so I should have written this post yesterday or the day before but things have been pretty busy since our return from California. Not to mention, we've had some pretty remarkable milestones... of course from the twin we didn't spend thousands towards his development on.

Jaden's first word came when we finally got home from our trip at midnight. The cat was parading around chastising us for being gone so long and Jaden pointed at her and said "ca!" three times. Not only had we not seen the cat for more than a week but I have never consciously taught Jaden the word "cat." But the next morning I asked him if that was the cat and he replied "ca!" So, it's official. (Yesterday, we went to a house with dogs and he said "ca!" and I said, "No, that's a dog," so he calls them "da!")

Also, two days ago Jaden toddled his first few steps all on his own and yesterday while holding a remote he toddled a few more before my exclamation of joy caused him to topple over. It's very exciting, but of course it takes effort not to think all the un-accomplishments going on nearby.

Anyway, all of that is to explain why I didn't post this awesome picture at a more appropriately festive time: 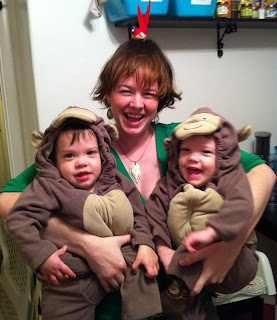 It's hard to tell from this photo, but I was a tree for my two monkeys to climb on. (Anyone who knows the series Portlandia will appreciate that I "put a bird on it.")

I thought it would be funny if Malachi were Monkey See and Jaden were Monkey Do, but the few people I told that joke to laughed nervously, so maybe it's offensive. But hey, last year Malachi got to be Superman while Jaden was Clark Kent, so I think it's fair. 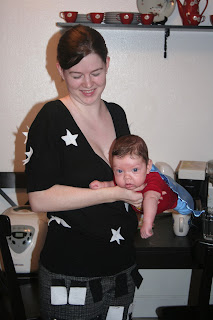 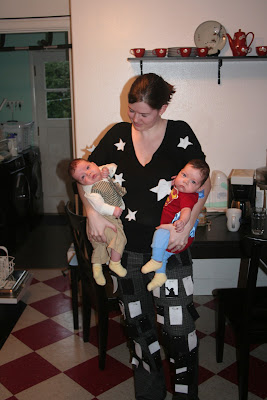 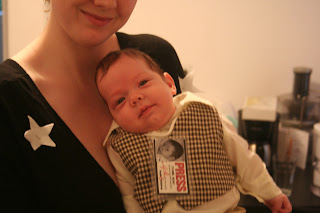 In case you're wondering, I was A Tall Building.

What were you guys for Halloween?