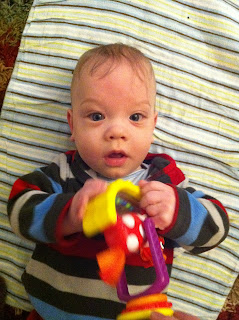 This week, Jaden has learned to roll over at will, grab objects above his head and say "ma ma ma ma." While those without children might think this is no big deal, considering it wasn't so long ago that his most significant "movements" happened in his pants, his progress seems remarkable to me.

It boggles my mind to think about the next six months, during which he will rapidly acquire the skills necessary to crawl and then — dear God — walk to any object in the world, reach out, grab it and (given his behavior to date) shove it in his mouth.

As I watch him rapidly build on the skills he learned just yesterday, it makes me feel like Jaden is a Superbaby who is developing at the alarming rate usually reserved for time-release photography. In comparison, Malachi's developmental pace seems much more measured, predictable and, well, normal.

Malachi has been manipulating objects with ham-handed fists for a few months and is only now using his fingers to explore and grab things. Malachi has rolled onto his side a few times, but quickly pops back to his back in surprise. At mealtimes, Malachi just yesterday succeeded in pinching a spoon with a tense crane hand and inelegantly maneuvering it to his mouth.

Jaden, meanwhile, grabs the spoon forcefully and shoves it in and out of his mouth several dozen times each mealtime as if to say: "Really. I got this. Just gimme the strained peas and go about your business."

In accounts I've read of other parents of children with CP, they tell of the shock of meeting other children of the same age at a playdate or daycare. Sometimes it is only then that they realize how delayed their child is and that something might be seriously wrong.

As a parent of twins, I get this shock every day. Every day Jaden learns how to do something that Malachi can't do. Every day I mourn for the little boy getting left behind.

As Jaden races ahead, blurring past milestone after milestone, cheers for his accomplishments will always be accompanied by the deafening silence of Malachi's un-accomplishments. And when Malachi does finally reach those milestones, the accompanying fanfare will be out of proportion to what Jaden received for the same accomplishment. Because, after all, we know that Jaden will have his first steps; not even the experts can tell us if Malachi ever will.

None of that is fair. It's not fair that Jaden will have a higher set of standards, that his brother will get praise for seemingly easy feats, that everyone will be giving Malachi so much more attention and help. It isn't fair that my children's basic accomplishments will be so staggered. It isn't fair for a twin to have a twin with CP.

No, it isn't easy to be a Superbaby.
Email Post
Labels: cerebral palsy Jaden Malachi