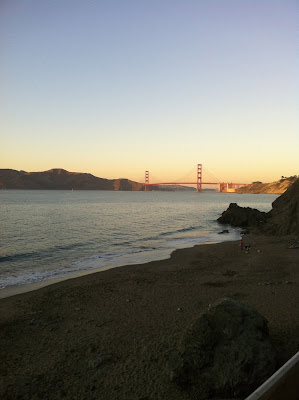 The best thing about our recent therapy trip to California — aside, obviously, from the (albeit fleeting) gains that Malachi made — was an increased understanding of the Anat Baniel Method (ABM) and a conviction that it really works.

I was raised on homeopathy and naturopathy, so when I say that alternative methods tend to be pretty hokey, I say it with love in my heart. ABM, however, is NOT hokey. It's not about aligning energy or pleasing thetans or whatever. It is — once you get passed the steep learning curve — a logical and internally consistent method that operates on the technique that every healthy child uses to learn how to walk: playing and experimenting within the confines of his or her ability.

In one of Malachi's typical ABM sessions, he cries infrequently and often plays contentedly for most of the session. (Let me tell you that it is quite remarkable in itself for Malachi to play contentedly for 45 minutes.) Instead of dictating a particular position or game for him to play, the practitioner follows his movements and amplifies his intentions, often pressing on or — for lack of a better word — wiggling different parts of his body that could help him in his endeavors.


In the traditional view of therapy as "hard work," it might not seem to an outsider that he is learning anything. But the latest brain science tells us that we learn best when we are actively interested and learn worst when we are angry or upset. So it follows that fostering a calm alert state, rather than a frenzied straining effort, is best for learning new skills. For example, during a session, Malachi will periodically stop playing with his toy and have this look on his face like he is "listening" to his body and really feeling what the practitioner is doing. That's the best, because you know he's learning about some new part of his body, making the connection that other muscles can be involved in his action to make it easier and more fluid.

I have to admit that I don't know the history of physical therapy. But it seems to me after witnessing this method in action that traditional physical therapy took methods that were effective at treating muscle problems and graphed them onto people with brain problems. It works, but it has its limitations. Rather than the traditional view that Malachi's muscles are too weak or too tight, with ABM the idea is that his brain is unaware of how it is using those muscles at that particular time and by drawing his attention to it, he can fix it.

Since Malachi's disorder stems from his brain and not his muscles, this makes a lot of sense to me. It also makes sense to me because I can see it as the edge of a spectrum that I am also on. Just like anyone, sometimes I will be preoccupied and squeeze someone or something too tightly — that's my brain failing to send the right signal to my muscles. Or more globally, I slouch a lot even though it hurts my shoulders to do so. By bringing my attention to what my back muscles are doing, I can use them more efficiently and effectively. We are helping Malachi do the same thing, just on a bigger scale.

However, the biggest thing I still struggle with in ABM is this concept that you shouldn't put your child into a position that he or she can't get into his-or-herself. This is a hugely controversial aspect of ABM and one that deserves its own post. For now, suffice it to say that I'm still not very strict about it with Malachi but I do understand the logic behind this tenet better than I did before and I fret constantly over whether I'm doing the right thing by holding him up to "chase" after his brother. (OK, I don't really fret over it at that particular time very much because it's RIDICULOUSLY ADORABLE to watch them shriek and giggle when they "catch" each other. But other times I hold him up to play, I do worry a lot about it.)


Overall, despite the negatives, if you want a method that focuses on the brain, I think ABM is the best one I've found.