Why Doctors' Appointments Are My Own Personal Hell 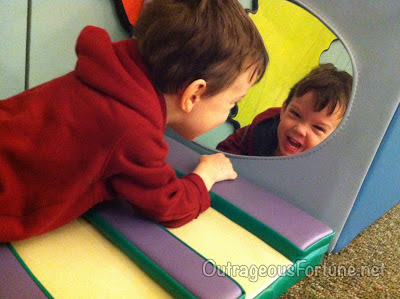 They are like my own personal hell, a perfect storm of circumstances to drive me completely nuts.

First of all, I have to go to them with the twins. They are screaming and wildly frustrated two-year-olds who want to grab everything in sight. No doubt, they also pick up on my nervous energy and act even worse than normal. While all this is going on, I have to give a full, brief and accurate oral report on all the various facets of our care for our son while simultaneously trying not to scorn the established view of things and explain how our alternative philosophy accounts for all of their concerns.

Then comes the worst part. The part when the doctors tell me their recommendations. I know intellectually that this the entire point of a doctor's visit and that they are just trying to help me and give me the tools we need to succeed. I know this. But with every recommendation I feel just a little more inadequate. It doesn't matter that I've turned my entire life upside-down for Malachi's cerebral palsy, traveled the globe in search of the best treatment and raised tens of thousands of dollars for it. There's always something I'm not doing and doctors' appointments are when somebody sits there and tells me that to my face.

The major focus is usually food. Malachi doesn't eat enough of it, which is a big problem, but I just don't know what more I can do about it. While he doesn't eat nearly the varied diet that JJ does, it's not that much different than what I ate as a kid. (Another reason why doctors appointments are my personal hell: all deficiencies in Malachi are fair game for treatment. Other people's kids just get to be picky eaters, but because the pickiness is added to his CP, it's a Big Deal.) And he does eat. Unlike many other kids I know, he would gladly down calorie-rich PediaSure all day long.

I also hate that they call everything into question. I've already gone down this path and have done exhaustive research on it. And yeah, you should always check your assumptions and you never know if a different way would be better... but I'm already so far down this path. Imagining reversing all the monumental changes I've had to make in my thinking and my life just seems too daunting.

I guess the problem is that my entire life has become Malachi's CP. I read constantly and widely and I already know what the doctors are going to say and why, but I still don't agree with most of it.

All I want is a doctor that I can ask questions to, one who "gets" where I'm coming from without my having to explain the last two year's worth of my understanding about how the brain learns. They would get it, I'm sure, but it would take time and energy that I just don't have.

BTW, these are a bunch of links to awesome things that might help you when you feel like giving yourself a temper-tantrum. Thanks to my Facebook friends for contributing them when I was having a rough day. I was going to incorporate them into the above post. But then I didn't. One more thing to not cross off the to-do list....

I hope you connected with this post! Feel free to share using the icon buttons below and if you haven't subscribed to my RSS feed, liked me on Facebook or followed me on Twitter, there's no time like the present! Oh, and Dark & Light: A Love Story in Black and White is available here and all profits go towards my son's medical needs.
Email Post
Labels: #thepatientexperience alternative treatments Anat Baniel Method cerebral palsy Malachi parenting special needs