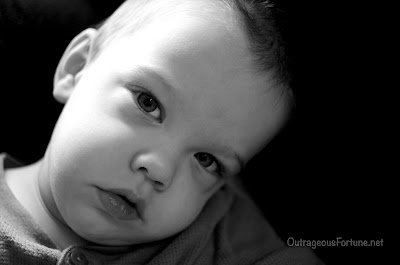 I am being dragged kicking and screaming toward the conclusion that I have to ask my friends for money for my son. Not like the awesome-but-rather-underfunded $1,000 fundraiser I did last year. Like, $$-per-plate, silent auction, we-need-some-serious-cash fundraiser*.

I hate this idea. For several reasons. First, because the insurance company and the state programs — to whom you and I collectively pay tons of money in order to help out kids like Malachi — really ought to cover our preferred, and scientifically based, methodology. We truly believe it's better than the physical therapy they offer — and even our PTs agree — but it's a long, hard slog to get the peer-reviewed research needed to back that up. We are still fighting that fight, but while we jump through hoops, Malachi cannot go without it.

Second, it's going to be a ton of work and this is exactly what I feared my life would become — all about Malachi and his extraordinary needs. It's been two years now since I've worked and though I'm looking for jobs, I'm painfully aware of how few employers out there will realize that these years are those in which I've acquired a lot of personal growth, not to mention marketable skills. A new study out shows that mothers of children with special needs make an average of HALF what their counterparts with healthy children do. That despite the fact that special needs children have expensive needs. Judging by recent court awards, special needs children cost $3 million extra to raise, not to mention lost productivity when they become adults.

Third, I've always been very conservative with money and have managed to keep my family's head above water over the past two years with only one income and some support from parental figures. I hate that I can't "make it" on my own anymore, having depleted our savings and trimmed every expense I can think of.

But, fourth, I also feel like if I ask friends for donations, my budget is suddenly under public scrutiny. If I post on Facebook that I'm enjoying a relaxing weekend at a cabin in a resort area of the state, will I need to stipulate that the cabin is a friend's and through carpooling and food sharing, the entire weekend cost me just $30? If Matt and I manage to finally take a vacation somewhere sunny, will people think we took their money and spent it on ourselves? What about when our car finally kicks the bucket and we're forced to buy a new one? Will we ever get to have nice things again without feeling guilty or beholden?

So while I'm sorting through all these emotional issues, the fact remains that I need thousands of dollars for Malachi's medical expenses. This will probably mean a fundraiser at some point this summer and I'll need all the help I can get.

Anyone out there with advice or a willingness to take on a piece of our fundraiser is more than welcome to contact me!


* I should give a shout-out here to the kids at David Douglas High School, who have adopted Malachi as their Sparrow. Sparrow Clubs are an awesome program linking socially conscious high schoolers with needy kids in their communities. The high school is raising some unspecified amount money for him, we'll find out how much in mid-May, but we have had little to no involvement in the process. This is wonderful from the point of view of my schedule but it's also why I nearly forgot to mention them!