We don't need your money,
but please give it to us anyway 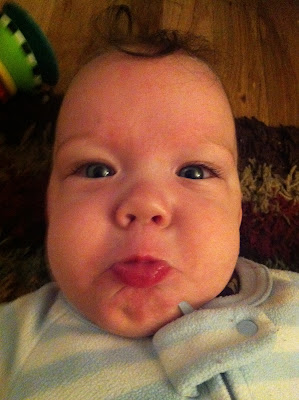 This is probably the worst possible way to kick off a fundraiser, but I can be pathologically truthful, so here goes:

We don't need your money. I cannot tell you that without it Malachi will not get every treatment we think is reasonable and effective. We will dip into our emergency funds, take out credit cards, have date nights at McDonald's and do whatever else we can to afford it. We do, after all, have money in savings and change on our nightstand and thus we are richer than the vast majority of the world. I firmly believe that every budget — from our welfare-qualifying single income to the massive federal budget it comes from — is an expression of priorities, and when you pit "the possibility my child will walk one day" against "I could really go for a burger right now," it's pretty clear which one you pick.

That said, donations would make our lives much easier as special needs kids are more expensive than even the garden variety. Malachi is as yet young and therefore many of the things he needs are medical treatments that we believe are effective, but our insurance company won't pay for. (You can read this list of alternative treatments we've tried.) As he gets older, there will likely be expensive adaptive devices, but I don't want to think about that right now. Right now, I want to think about how to get him as much functionality as possible.

To this end, we are excited about a method called Feldenkrais or ABM (I don't have time to get into the subtle differences between the methods). I've told you about it before, but after an intensive course of six sessions in three days, I understand it much better and am really excited about the changes I've seen in Malachi since. He is now rolling over, making many more sounds with his mouth, eating solids better, reaching above his head more fluidly and overall seems happier — more comfortable in his skin. (That last bit alone would make the treatment worth it to me.)

We would love to be able to do this with Malachi every month and even though our practitioners are taking big discounts, it's still pretty expensive to do so many sessions. Added to this are monthly CranioSacral appointments, co-pays/deductibles on allopathic doctors' appointments, the occasional Chinese medicine appointment and, coming soon, hydrotherapy appointments. (Too bad I can't charge it all to a credit card and get frequent flyer miles out of teaching him to walk. Oh, the irony.)

So since June is the twins' birthday month, I thought now would be a good time to pass the hat. I've set a goal of $1,000 by the end of the month. Part of me feels this is overly ambitious, but another part tells me there are at least 100 people out there who are saying: "Man, I could sure go for a nice $10 burger right now, but hmm... maybe I could help that one kid walk, instead. That'd be cool, too."

So go on and click that button and put in whatever figure you feel you can afford. As I laze about in the grandeur of my 792-square-foot house (no, I did not forget a digit), cooking gourmet meals with close-date sausage I bought on food stamps, I will think of your kindness and praise your generosity.


I should also mention that ALL donations will go directly and exclusively to paying for Malachi's therapy bills. If somehow we exceed our goal, we will do a happy dance (which we just might post a video of here) and keep going. It would be wonderful to be able to do Feldenkrais more often or have the option to explore another type of therapy.
Email Post
Labels: alternative treatments cerebral palsy Craniosacral therapy Feldenkrais fundraiser Malachi