Because it seemed so absurd. It seemed so much like scenes we've seen a hundred times in movies: news reporters shocked at what they were reporting, fireballs, carnage everywhere, people fleeing on foot. It was like walking down the street and seeing a Technicolor cartoon character — this sort of thing did not belong in reality.

Once I got ahold of myself, my mood was much more somber. The whole day everything seemed quieter, as if someone had put a half-mute on this bizarre Movie of the Week.

But even with watching the round-the-clock news coverage, I never cried until a few days later when I came upon pictures on the Internet of people grieving around the world, people showing their love and support for Americans in their time of tragedy. 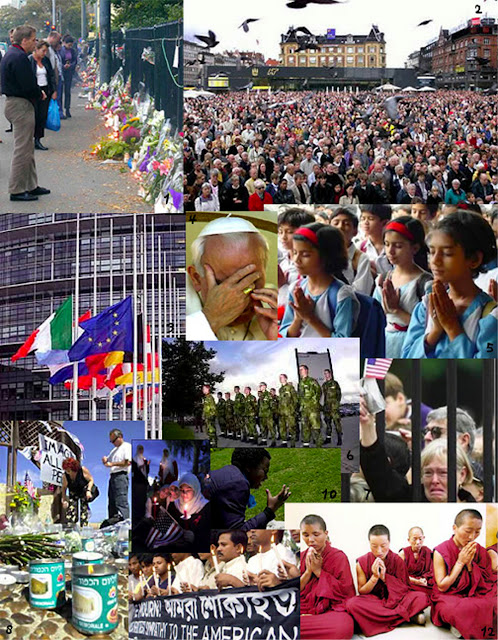 (I made them into this collage, and I apologize to the photographers that their names are on a file that, 10 years later, my computer is unable to read.)

In the wake of Osama bin Laden's recent death, I was startled to find a similar sort of collage on the New York Times website of reader-submitted photos.

As before, I didn't feel emotional about bin Laden's death until I saw these photos and it got me to wondering why.

I realized that death and loss and anger and violence aren't the lessons I take away from these events, but the common humanity and love and togetherness we increasingly show on an international scale.

Tragedy is heart-rending: it tears out our hearts and makes us feel that the world will never be the same again. But in so doing it also shows us our hearts and shows us what's in the hearts of our fellows, countrymen and foreigners alike.

I, for one, am pleased to see that the hearts of the vast majority of us are ready to grieve our losses together, celebrate our triumphs together and, above all, live peaceably together.
Email Post
Labels: 9/11 Osama bin Laden