What scares me most about my son's disability? You. Yes, YOU.

You're probably a lot like me. You consider yourself pretty smart, fairly thoughtful and accepting of all people.

You see, what I fear most about my son's disability isn't how he might need a wheelchair to get around. It isn't that he'll need adaptive devices to perform daily tasks you and I don't even think about. It isn't even that he'll need countless medical interventions, including but not limited to surgery.

Today I found out that list of people includes highly educated doctors and medical professionals who presumably interact with disabled patients all the time.

This mother's little girl was denied a common and life-saving medical procedure. Her crime? Being born with Wolf-Hirschhorn syndrome, a genetic abnormality in which one of the symptoms is intellectual disabilities.

If you read the above link, you will learn that a doctor at the Children's Hospital of Philadelphia recommended against a kidney transplant SOLELY because of this girl's mental retardation. If he gets his way, she will die.

As if we parents of disabled children didn't have enough to worry about. 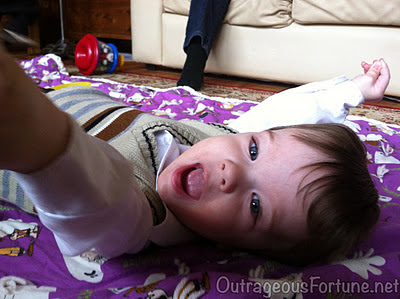 So what can YOU do? How can you help make the world a more tolerant and accepting place for my son and others with disabilities?

Well, that's the good news. You're doing it right now. Reading this blog or others, familiarizing yourself with the lives of people with disabilities, getting to know them as people instead of statistics or theoretical quasi-people will make it harder for you to stomach stories like the one above.

Whether it's race, creed, culture or any other thing that divides us, the most powerful weapon is knowledge: knowledge of the complexity of each individual on this planet, an understanding of his or her basic humanity and the acceptance that ALL people are owed love, respect and a place in society.


P.S. If you need a little pick-me-up after reading the link above, I highly recommend this video. The little girl is so cute and the message is powerful and beautifully rendered.
Email Post
Labels: cerebral palsy