Wordless Wednesday, but not by choice

Regular readers will know that I often have a segment on here called "Wordless Wednesday," which consists of images that mostly speak for themselves.

However, this Wednesday is "wordless" for me because for some reason, Facebook is not allowing me to update my status and hasn't for the past three days. I can comment on posts, I can add links, I can upload pictures. I can do everything but update my status and make original posts in chat groups (which with Facebook's new system is basically a status update that is only shared with those people).

At first this was mildly inconvenient. OK, so maybe people don't need to know what I think of our public radio's telethon right after Christmas (Really? Do they think that's going to be successful when everyone is tapped out and on vacation?) and probably they don't care that we tried to go to the Oregon Zoo's Zoolights festival but the massive crowds sent us to Peacock Lane's more modest light show instead. But there have been some pretty cool things lately that, goddamnit, people need to hear about.

Jaden is simply blowing me away with his helpfulness. This kid is 15 months adjusted age. He can say very few words and signs just a little. (His utterances often revolve around the word "cat" — "dat," "dis," "da," "ca" being among them — though "chzzz" — cheese — is beginning to make an appearance.) So you would think he is a pretty basic creature. Not so. Yesterday, he picked up a used tissue and walked it over to the garbage can ALL BY HIMSELF. Today, he took old Cheerios out of Malachi's highchair and tried to put them in the sink (he's too short to reach) ALL BY HIMSELF. Then, when he was getting into a box in my room, I handed him a toy and asked him to take it to Malachi, whom I'd left on his tummy in the living room. I did this just to send him on an errand out of the room, never expecting him to actually do it. I was stunned when I walked into the living room moments later and Malachi was on his back happily playing with the toy Jaden had given him on his way to the kitchen.

Which leads me to Malachi's latest milestone: getting into trouble. Until now, he hasn't really been able to do much quickly enough to get into trouble. But today I went to change Jaden's diaper and left him in his highchair near the dining table. On the table is a bin of odds and ends — nipples, bottle caps, oral syringes, etc. — that I have repeatedly told him not to touch and had pushed away from where (I thought) he could reach. When I heard the loud crash, I knew instantly what had happened. I grinned to myself at Malachi's accomplishment but vowed to be stern with him so as not to treat him differently than his brother. My resolve melted quickly though when I turned the corner and Malachi grinned triumphantly at me while chewing on one of his lapful of bottle caps. He seriously has the best smile and it is almost impossible not to smile along with him. 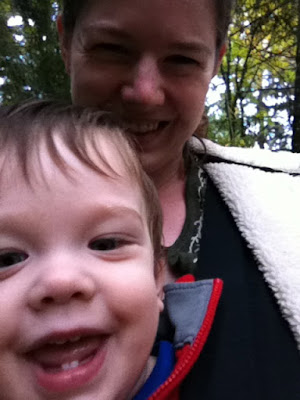 And for my grand finale, I have to mention that both of my boys have started to say "Mama." In fact, I think it is approaching Malachi's first word status. I say "approaching" because I'm not convinced they know what it means yet. I know they know I like it and that it gets my attention. Malachi will say it in the car to try to flirt with me while I'm driving and they will both say it at mealtime to try to butter me up to give them more of whatever they want. That plus Malachi's megawatt smile is going to go a long way, and I think he knows it.

So there. That's what's happened to me in the last few days. Now I don't feel the need to open my front door and scream these things to the world.

I'm not even going to think about what would happen if Blogger gives me an error message when I press Publish.