I wrote this letter for our daycare and thought it might interest you folks, too. I haven't talked much about Malachi's swallowing disorder on this blog, but I would say it is a major part of our daily life. Jaden can eat pretty much anything, whereas Malachi has a narrow diet consisting of thick purees and — much to my chagrin — super-sugary Pediasure, because he is unable to chew and swallow properly.

For readers who aren't parents, I should explain that "solid food" for babies means anything that isn't milk. For readers who are parents, towards the end of the letter are food ideas that we use that might be helpful for you or anyone with a typically developing 6- to 12-month-old.

If anyone out there is also dealing with dysphagia, I would love to have your comments, advice, etc. 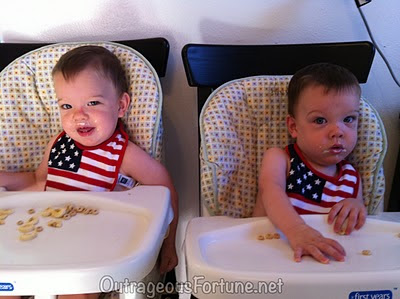 Malachi has a swallowing disorder called dysphagia, which doctors tell us is unlikely to ever go away. For him, this manifests as a delayed swallow reflex, which means that he is at risk of inhaling his food, which in turn could lead to aspiration pneumonia and even death.

Malachi also has trouble closing his mouth completely, chewing his food appropriately and moving the bolus (food blob) around in his mouth with his tongue.

Combined, these problems force us to feed him only pureed food or dissolvable food (i.e. things that become puree when in contact with saliva, like Cheerios and Gerber Puffs).

You are welcome to try foods that seem to conform to this list, but only try small amounts and stop immediately if he coughs and gags. Do NOT try hard foods, such as real fruit pieces (no matter how small) or bread or other things that would choke a 6-month-old.

The overall goal of food we offer him is that it be thick enough to slow down the swallowing process. Thin, watery foods can shoot quickly down the throat, too quickly for his muscles to react.

The secondary, but also very important, goal is to provide him with as many opportunities as possible to direct his own eating. Intentional action plus success equals brain connections, so the more he participates and is rewarded for his participation, the better. This means offering him self-feeding foods at every meal and waiting for him to open his mouth or otherwise indicate interest in food before putting the spoon in. This also means stopping when he repeatedly refuses to eat, no matter how much or how little he has eaten.

This is all much harder than it sounds, as I am intimately aware.

Positioning:
Malachi needs to be supported while he eats so that he can concentrate on his mouth. We feed him in a chair that fully supports his back and head and is reclined at about 60 degrees. We also put a rolled-up dish towel on his left side as he tends to lean that way and can get stuck if he goes too far.
In recent weeks, we have also fed him a bottle this way. However, if he is particularly fussy or tired we go back to the old way. The old way is reclined on a pillow at 45 degrees with his head and, ideally, his entire body turned to the side with his legs tucked up and his chin tucked down. This prevents liquid from seeping down his throat by using gravity and the natural throat closure that happens when your chin is down.

Bottles:
Malachi takes Pediasure after solid food meals. It needs to be thickened with two scoops (1 scoop per 4 oz) of Thick It. You will likely have to pour about an ounce out to accommodate the powder. I've been told it is ideal to whisk or stir it, but I haven't attempted that inside the bottle. If you do shake it (as I do) shake it as lightly and as briefly as possible, otherwise the Thick It will form hard, clear chunks that clog the nipple. Even if you have done it perfectly, you often need to check the nipple for clogs. Watch as Malachi is eating and if you stop seeing bubbles or don't think he is swallowing or if he makes frustrated sounds, pinch the nipple below the hole and squeeze upward until you see bubbles or liquid come out. Careful, the clog can come out with some speed.

Sippy cups:
Malachi should really only get water in a sippy cup, away from food. As long as it is clear water, it is unlikely that aspirating it will do damage to his lungs. He will likely cough after sips so be careful not to overwhelm him.

Things he can feed himself:
Veggie Sticks
Skinny Fries
Graham crackers (Honey Maid dissolve best. Off-brands not as well)
Cheerios (the multigrain are best because they are "lightly sweetened" making them stickier)
Puffs designed for babies (Corn puffs tend to be a perfect size and shape for his hand) I tend to use these sparingly as I don't think they're very healthy
Baby Mum-Mum crackers
Very thick purees (the consistency of refried beans, mashed potatoes, or sweet potatoes — this gets very messy, but he can get a little in his mouth)
tiny pieces (the size of HIS fingernail) of freeze-dried (not dried or dehydrated) fruit — these sort of melt away
Real fruit in a mesh feeder (we haven't had great success with this, however)

His favorite spoon foods:
*Yogurt (I use plain Nancy's organic full-fat)
*Gerber Mango puree  *These are his favorites
Fruit purées (pear, applesauce, banana, etc.) WITH baby cereal mixed in to the consistency of creamy peanut butter
Gerber Peas, sweet potatoes, squash, also with cereal to desired consistency
cereals mixed with sauces, such as wheat cereal with tomato sauce
real food that has been through a baby food mill
Most other Stage 2 purees, with cereal to desired consistency (so far he absolutely hates Green Beans and Peaches)
Email Post