Would I have terminated my son? 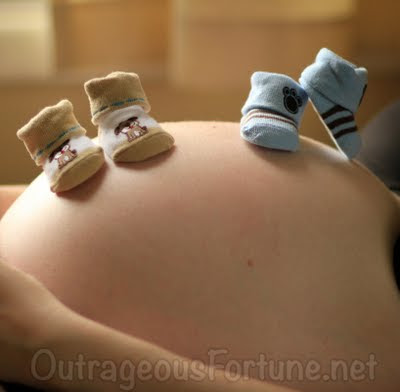 My initial visceral reaction to the recent NYTimes piece about the growing number of women who elect to reduce their twin pregnancies to a singleton was of disgust. How could you possibly choose which one? Which of my sons would I have gone without? How could I do that to his brother? How could I rob them of their twinhood? What sort of selfish person would play God like that?

Even knowing what I know now — that my life would be completely turned upside down and all my hopes and dreams for my career and what my family would look like would be shattered — I would never go back in time to terminate an "extra" baby.

In fact, I'll go so far as to say I think the people who would are completely unprepared for life as a parent — in which you have significantly less control over your life and certainly can't expect to decide who the person you nurture grows up to be.

But would I have done it back at the beginning of my pregnancy? If I somehow could have known then that one baby would have brain damage?

Yes. Absolutely. In fact, it wouldn't even have to have been that early.

When we were told at 20 weeks that we were having twins and that preterm birth was very likely, we asked the high-risk obstetrician (who was forced upon us) what sort of chances we would have of normal babies if we gave birth early. He told us that at 28-week fetuses join the "90/90 club." That is, 90 percent of babies survive and 90 percent of those who survive are normal.

That became our target date. Two months of hormone-sodden stress all focused on getting passed 28 weeks. Because, you see, after a lot of thought and discussion, my husband and I agreed that if they came before 28 weeks we would have signed their DNRs — essentially an out-of-body abortion.

We didn't want a special needs child. Let alone two. Just because medical science has advanced to keep micro-preemies alive doesn't mean we should have to shoulder the burden of them for the rest of our lives.

So it shouldn't have come as a surprise when the day before I hit 28 weeks the stress built to a fever pitch and I was forced to admit myself into the hospital with contractions and a dilated cervix. Thankfully, an infusion of epsom salts (magnesium sulfate) kept the contractions at bay and I stayed there for two weeks feeling bored and confident in my victory lap. (Ha.)

So if Malachi "had" to have a disability, I'm eternally grateful that we made it passed 28 weeks so I wouldn't have had to make a decision that would have scarred me for life and robbed me of the simply AMAZING person he is — cerebral palsy or no cerebral palsy. Of course, it would have been a major mistake to have terminated him and/or his brother. They are AWESOME.

But then my husband asked me a question that left me speechless.

If we got pregnant again — NOW — with twins, or even just one, what would we do?


Considering I'm terrified of having any more babies, I would really have to think about that one.

Pregnancy is such a weird time because everything feels hugely life-altering and yet so undefined. The baby doesn't seem real at all. It's hard to reconcile the idea that the thing inside of you will one day be a person. And not just any person, a person you will love more than you love yourself. A person who will amaze and inspire you. (And yes, a person who will harass and torment you.)
At what point is that fetus real? I don't know. I know it's a lot earlier than I used to think. But I still don't think I'm sure it starts at conception. Maybe other moms out there have had life-changing interactions with their unborn children and would disagree with me. I wouldn't really know. Because of the uncertainty and fear of preterm labor — and what we might have to do because of it — I rarely interacted with my babies in utero. I didn't stop calling them Baby A and Baby B until after 28 weeks.