The worst thing anyone has ever said

On the wall in my twins’ bedroom, there’s a picture of me holding my son Malachi for the first time. I’m in the NICU and he is so small you can barely see him under the blankets. I’m beaming make-up-less at the camera. I’m happy, relieved that the trauma of the previous few months is over. Everything really was going to work out for the best. The odds were finally in our favor. The horrific scenarios I had played out in my head ever since that terrible day of the ultrasound were finally memories, in the past, gone, over. 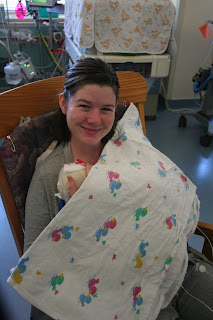 Was it then? Was it in that moment when the picture was taken that blood was pooling my son’s brain? Was it my insistence that I hold him, my steadfast belief that he needed his mother’s touch as much as possible during those days in that heartless plastic box, was that the trigger? Or was it another time? Was it that nurse I never liked, did she handle him too roughly? Or was it during the birth, when I chased out anyone who tried to put a heart rate monitor on my huge belly? Am I to blame? Even if it wasn’t directly my fault, doesn’t ultimate responsibility rest with me? Couldn’t I have chosen another hospital? Couldn’t I have insisted on a different NICU?

I’ll never know what the cause of the brain damage was, but I know that life will never be the same. I know I will never have that smile I have in that picture again. I know I will be happy again, sure, but somewhere lurking behind my smile will always be the loss of innocence. The knowledge that things really can get that bad. That worst-case scenarios aren’t for other people.

Every time I watch my son Jaden reach a milestone or get better at manual tasks, I can never be truly joyful because I have to wonder if Malachi will ever do it, too. Every time I see Malachi act differently than Jaden I have to wonder if it’s because of his brain damage or simply because he’s a different kid. It’s not fair to either of them. It’s not fair to me. It wasn’t supposed to be this way.

I hear that a lot in my head: It wasn’t supposed to be this way. It sounds trite when I write it or say it out loud. I hear the automatic response: Yeah, life sucks, it’s not fair, tough shit, deal with it. But who could have even imagined this? Even during my wild fantasies — those ones that every pregnant woman grapples with — I never imagined it would be this bad. Not just twins. Not just a special needs kid. Both.

And yet, it could be so much worse. Both of them could have brain damage. Malachi’s damage could be much more severe.

And yet, it could be even worse.

You want to hear the most horrible thing anyone has said? One of my best friends was pregnant at the same time as me. She went in for her 20-week ultrasound and, just like me, found out horrible news. Only it was even worse: her baby had died in utero from a genetic abnormality. Within 48 hours, my friend gave birth — not aborted, but fully went into a day-long labor — to her dead daughter.

So here it comes, the worst thing anyone has ever said: I envied her.

I envied her because her life could go back to normal one day. The events of that pregnancy — while horrifically sad and traumatic — wouldn’t last a lifetime. She wouldn’t have to watch her daughter struggle every day with activities the rest of us don’t even think about. She wouldn’t have to wonder if there was something she could have done, something she could do or wasn’t doing every day to help her get better. There was no getting better, so there was closure.

My life will never be “normal” again, not as I knew it before, not as I imagined it being. I don't get to go back to the person I was in that picture, exhausted but self-assured, confident that things would turn out the way I knew they would.

It wasn't supposed to be this way.
Email Post
Labels: cerebral palsy