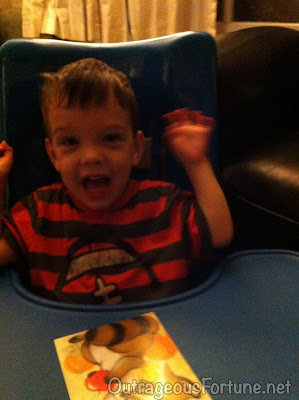 Every time I venture back into the Physical Therapy (PT) World, I reemerge scratching my head and muttering to myself.

Don't get me wrong — I think physical therapists are very kind and smart and have a great deal of knowledge and experience about cerebral palsy. That is why I keep going back every few months. Just to make sure I'm not getting too far into the Anat Baniel Method (ABM) World and missing some key piece of information. But by and large I find physical therapy philosophies to be fundamentally flawed when dealing with a person with a brain disorder not a muscle disorder.

In October we had a PT appointment during which Malachi was forced to sit upright with as little assistance as possible as he attempted to manipulate objects with his hands. Every few seconds, Malachi would nearly topple over and as a result he became more frustrated, closed and defensive in both his movements and his attitude. My overall impression was of somebody trying to teach him Swedish by making him memorize long sentences phonetically. It was clear to me that by the end of such a frustrating and bewildering venture, Malachi might be able to approximate Swedish but it would never be functionally useful to him because he would have never learned what the words meant or been allowed to order them into sentences that expressed what he wanted to say.

Yesterday we had an appointment with a new PT and OT at a very well-regarded local hospital. (This was an appointment I made some months ago, likely during an "ohmygodamIcompletelymessinghimup?" late-night stress-a-thon.) Because it was a new appointment, they did very little work with Malachi but even so, it was like we were talking about a different disorder.

For example, I told the PT that Malachi's primary difficulty was in understanding and controlling his spine. The PT corrected me, saying "his trunk." Well, yes, his trunk, I guess that's true. But the vast majority of the power and control in your trunk comes from your back i.e. your spine and the manipulation of those large, powerful muscles around it. In my (albeit limited) experience, most PTs ignore the back and concentrate on the tummy muscles, like a bodybuilder worried about his six-pack. But look at any typical baby who first learns to walk and you will see his tummy poofed out, his lumbar curved and his legs far apart. This is a very stable and easy position. If you could somehow force that baby to walk with his butt tucked under and his tummy rigid, he would not be pleased and he would probably fall down a lot.

During another part of yesterday's appointment, the OT had a few objects for Malachi to manipulate. When he would be unsuccessful after a few seconds, she would grab his hand and "help" him with the task. While he was happier that the ring was on the stick, or whatever it was, I could tell that he had learned approximately nothing about what it would take to put it there — except perhaps that he needed her hand on his to make the magic thing happen.

At another point, she was watching him struggle with a iPhone toddler puzzle and remarked at how good he was at figuring out ways around his motor difficulties. "What a smart boy," she beamed at me. "You can't teach that sort of problem solving." I feel so sad at that remark because that's just not true. But how could I possibly explain that in a few short seconds?

Perhaps I should have said this: ABM is all about teaching children that they have a choice to make, empowering their choice (even if we think it's the wrong one), and encouraging them to continually search for better alternatives. The self-confidence, limitless growth and sense of security that results simply cannot bloom in a child who is forced to do things the "correct" way (ways that to him seem dangerous or incomprehensible or else he would already be doing them), or given tasks that are so far beyond his ability as to only teach him that he is hopelessly incapable or dependent on others for success.