In search of El Dorado

Combatting immigration is the talk of the world at the moment. I tried not to blog about it, but it's such a ubiquitous topic that I almost feel it's my civic duty to weigh in.

In addition to the American debate raging on the issue, Le Monde, the national French newspaper, reported today that Spain has launched a diplomatic offensive against a new wave of thousands of African immigrants. Legislators in Madrid do not have the option of building a three-part fence across the ocean to stop what Le Monde calls the "quest for the European El Dorado," a term that I think cleverly reminds Westerners the similar motivations that brought their own ancestors to leave their homeland.

One could go into the complicated reasons behind the economic sluggishness of Africa and the other underdeveloped countries of the South. One could point fingers at the IMF, or the corrupt leaders, or even the climate. These are all very important issues to think of when trying to solve root problem, but I unfortunately don't have the expertise to address those issues. What I want to know is why are we afraid of this influx of foreigners?

That most immigrants are poor is true, but the reason they are drawn to Western countries is to take advantage of the capitalist, materialistic societies that they admire and respect. For better or worse, their presence will only serve to entrench that system. They are not here to start a revolution. They are here because they didn't want to start one in their own countries. They may take advantage of social services but, in case anyone hasn't noticed, Americans don't really have a lot of social services to take advantage of. Is the richest country in the world really not able to afford to provide the basic necessities of human life to people who only want a chance to succeed? But then perhaps we are afraid that immigrants will take away backbreaking labor from our fellow Americans, the products of our gutted educational system. If that's the case, as classical economists have argued since Keynes, we need only educate our populace for the whole boat to rise. 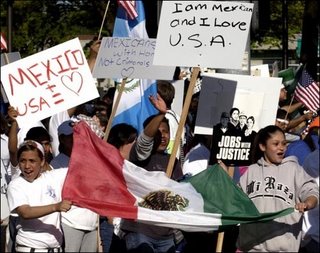 Behind all of these more or less empirical arguments there is a palpable fear of immigrants as people different than us. A friend of mine recently sent me a collection of quotes from immigrant leaders vowing to "take over" from the over-privileged whites. My question is, what exactly would immigrants change if they were in power? They love the American dream, that's why they're here.

An African friend of mine, who just finished a Masters in econometrics in France, wants desperately to come to the US for a job. He came to France for the chance at a good education, paid for by his government, but he can't stand the anti-immigrant attitude he finds all across France, a country that imported millions of people during the reconstruction and now refuses to accept them as French.

My friend wants to come to the land of liberty to work hard and earn a decent living where race and nationality don't matter. He is willing to go through the miles of paperwork and months and years of bureaucracy, just for the chance to visit our great country. When he gets here, well, if he gets here, I hope he doesn't find that we, too, have turned our back on a generation of dreamers.

P.S. Paul Greenberg's May 24th column "Coming to America" makes my argument much better than I do.
Email Post