8 Simple Rules for Teaching My Son With Cerebral Palsy 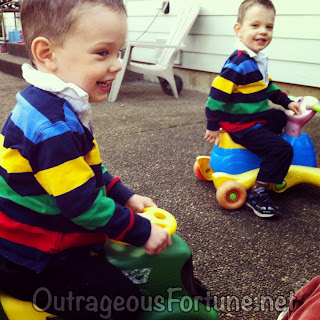 We are starting to get into the preschool scene and I felt I needed to write a letter that quickly described the approach we have to Malachi's cerebral palsy for his many new handlers. After I finished, I wondered how other people have approached their traditional teachers and therapists with the theories being promoted in this brand-new field of "Neuromovement." Remembering that the best way to receive is to give, here then are the suggestions I've outlined for our therapists.


To Malachi's preschool team,
Hello and welcome to our journey with cerebral palsy! Malachi is a bright and capable boy with a few serious motor challenges. As his family, we would like to share our philosophy and approach to these challenges, which at times may be different than what traditional physical therapists and doctors believe. Please read the following "8 Simple Rules" and if you have any questions at all, please don't hesitate to ask us!


1. Cerebral palsy is a brain disorder, not a muscle disorder
The approach is all about learning. I find it helpful to compare his gross motor learning to what I would experience with taking a dance class. Our belief is that it is not about forcing muscles and skeletal structures into a certain position. It's more like choreography. The reason he doesn't move the way we do is because he has different set of facts than we do. The key is making him aware of how he is using his body and encouraging him to imagine alternatives. If he can conceive of it, he will choose it because it will be easier and more comfortable than how he is doing it now. Trust in him to make the same decisions anyone would given the same facts.
2. Go from easy to difficult in every activity
Instead of just going into an exercise, try to start from something easy and build from there. Neurons are like trees — they start small and then get more and more branches. Each activity would ideally be structured this way for maximum benefit — start with something you know he can do well and build in small variations on the theme. This helps him feel more successful, in control and empowered but also helps build a relationship with you as a trustworthy person. Starting, as I've sometimes seen, with a very difficult activity when he's fresh and then backing off when he gets frustrated or overwhelmed teaches him the opposite lesson — that he is dependent on others for help and is more successful when he cries or gives up.
3. Avoid hand-over-hand
We believe that hand-over-hand doesn't teach him how to do an activity, only that something magic happens when the therapist touches him. He has to figure out for himself how to wield his body and that includes making mistakes.
4. Avoid pushing or "breaking" tone
Pushing against his muscle tone only increases the resistance and the effort he is expending. If Malachi is stuck in high tone, as sometimes happens with his legs, a good way to make him aware of this is actually to increase the tone by pushing with the muscle instead of against it. This increased pressure will make him suddenly aware that he is holding that muscle too tight and he will release it. "Breaking" his tone by pushing against it doesn't really teach him anything and is unsettling. We've all had the experience of someone pulling on us — our automatic protective response is to resist.
5. Encourage slowness
Things that are done quickly are done sloppily. To get a fully nuanced sense of what it is needed for an action to be done well, slowness is key. Avoid praising him for doing something fast, unless it's something he can do well. Speed comes with proficiency, not the other way around.
6. Assume competence
Start as much as possible from the assumption that he has purposefully chosen to put his body in whatever position it's in. If he is slumped over in a chair, try to figure out what missing piece of information he needs to chose a more upright position. Or, simply be curious about why that position is desirable to him. Perhaps he can see better that way, or perhaps he is unaware that his hamstrings can help to stabilize him and he is tired of feeling like he's falling all the time.
He is not a "victim" of his cerebral palsy because CP is not a thing. It is only an absence of a thing. It is a lack of understanding of the rules of gravity, a lack of uniform sensations across his body and a muddled picture of the relationships of his body parts to each other. Designing activities that outline and deepen his understanding of these issues will allow him to learn more about his relationship to the world around him in a way that physically supporting him never will.
7. Go for internal motivations, rather than external
Capitalize on ways that Malachi is internally motivated. He will do a lot for numbers, letters and pretty much anything with a battery. Giving him external motivators — such as getting praise from you — is more likely to backfire.
8. Behavior and emotions matter
Since it's a brain disorder, psychological components are just as important as physical ones. He needs to feel empowered and successful, not controlled or inferior. Also, crying is like spasticity for him — instead of moving, he cries. Instead of responding to requests to move, he cries. It's important to help him move through emotional states just as much as through physical positions.


As Malachi's full-time caregiver for the past three years, I know firsthand how difficult some of these rules are to put into practice and how sometimes other concerns trump them. We do not expect rigid compliance! We only ask that you be open to these ideas and how they can be incorporated into your interactions with Malachi. Again, if you have any questions at all, please don't hesitate to ask.
For more information about our approach, you are invited to read the amazing Kids Beyond Limits by Anat Baniel

, "Your Self-Confident Baby" by Magda Gerber and "Parenting with Love & Logic" by Cline & Fay.
Thank you so much for your time!

What about you? Have you ever had to talk to your therapists about a differing viewpoint on your child's treatment? How did you handle it? I'd love to hear from you in the comments!

Need a baby shower gift? Dark & Light: A Love Story in Black and White is a beautiful and insightful board book available here. All profits go towards my son's medical needs.