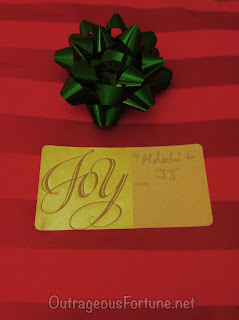 It was the perfect present.

First of all, it was big. Say what you want about size not mattering, but when you're 2 and it's a present under the Christmas tree, the bigger the better.

Second, it was a push-toy with a grocery basket. Perfect for JJ who is convinced that he is 40 years old and perfectly capable of doing his own grocery shopping — not to mention dressing and feeding and bathing — thankyouverymuch.

(And maybe — just maybe? — Malachi will learn to stand or push on it? — no, banish the thought.)

Third, it was collapsable so it can lay on the floor with Malachi AND it has three large easy-to-push buttons that play music, including his favorite — the alphabet song.

But finally, and most importantly, it was $4.99 at Value Village.

So I covered it in striped red wrapping paper and fussed with the bow. In a flourish, I added the tag and wrote:

To Malachi and JJ

What to write in the from?

So I always assumed that I would not perpetuate the myth of Santa. It's silly and manipulative. I can certainly understand that it would be useful to have a way of encouraging children to be good during the stressful holiday season. I also think it would be a really great way to skip tantrums in the store by rerouting them into having to petition some far-away, unknown man — who is totally and completely not me, so don't even try — if they really want something. And who doesn't like munching down on all the best Christmas cookies on Christmas Eve?

But much like a lot of things that would make my life easier right now — television, junk food, credit card debt — I feel like I will pay a much bigger cost in the end.

So, both my husband and I agreed that we would just not tell them about Santa and, simple at that, it wouldn't be a thing.

Well, now — in the third Christmas since their birth — my kids are old enough to at least loosely understand concepts like Santa and I've found that it is very much not as simple as that. Books, movies, toys, songs, games, malls, Santa is EVERYWHERE.

When it becomes an active discouragement rather than a passive ignorance, it feels a lot different. What am I supposed to do? Watch a movie together about how painful it is for Santa when we don't believe in him ...  and then turn to them and say: "That was a fun movie, huh? But you know, Santa really isn't real, so even though the movie says Santa will suffer if you don't believe, you really shouldn't believe."

And what do I tell well-meaning adults, including family members, who ask them about Santa?

"Bah humbug! How dare you lie to my kids! Grinchy-grinch. Grinch-grinch-grinch."

I thought of all these things as I sat and looked at my perfect present. But then I thought about how many times — from nutrition to cerebral palsy treatments, to starting a business — I go against the grain, try so freaking hard to do the right thing in spite of what everybody else is doing. 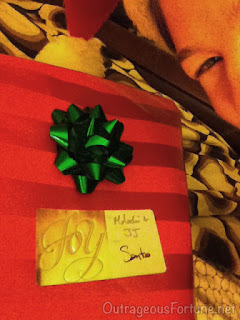 What about you? Does your family do the Santa Claus thing? Why or why not? I'd love to hear from you in the comments!
Email Post
Labels: Christmas