Photo Essay: The Unmaking of a Band 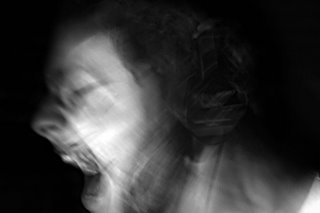 With a kind of music that 24-year-old lead singer Michael Aliotti calls “invigorating, exhilarating, uplifting, abrasive and edgy,” the Eugene, Ore., hard rock group A Mind Like Yours has played at stages across Oregon and Washington for the last three years. As the band members prepare to graduate from the University of Oregon, they bid farewell to their fans and friends with a three-track album entitled Blacklisted: Episodes from the Great Vertigo Paralysis to be completed mid-June.

But soon following the completion of their professionally recorded and mastered EP, the members, who graduate June 17, plan to follow separate paths. Making the album for them wasn’t about money, fame or recognition – though they admit those would be nice – but the pleasure and satisfaction they would get from having a tangible, artistic and professional final product of their efforts in their college band. 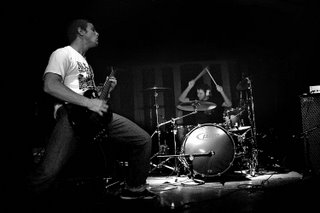 “We wanted to immortalize our songs,” said guitarist Michael “Goroe” Schwartz.
The band has gone through many incarnations since beginning in 2001 as 5 South, a name taken from a section of the dormitory hall where the five original band members practiced. With Aliotti the only constant figure, the band received local radio airtime with 5 South’s three-track demo and again with A Mind Like Yours’ six-track album, Everyone Must Parlour. But Aliotti says the current ensemble – Schwartz and Lucas Calderón on guitars and Drew Albares on bass – is the best group of musicians yet.

“We’re the most talented we’ve ever been. And it’s fun to be able to say that,” he said.
Albares, 22, is excited to finally be in a band that is more about the art than the money. “We’re all really actually friends and not just friends because we’re in a band,” he said. “It’s great because we’re able to just get together and melt faces.” 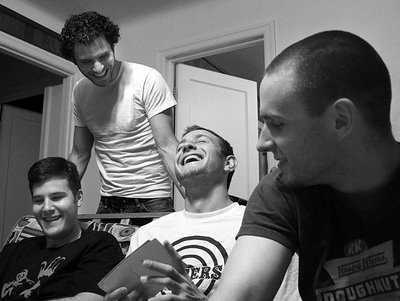 The music and direction of A Mind Like Yours has largely been a brainchild of Aliotti. “It invigorates me to stay strong with myself and the things I believe,” he said. “I’m a really positive person and this music is a victorious, overcoming, prevailing type of sound that not a lot of music can capture.” 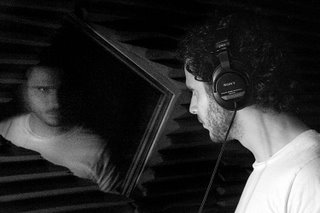 Aliotti draws his main inspiration from heavy metal bands like Norma Jean and Poison the Well, a band that one critic said doesn’t just play, it delivers “a bruising musical maelstrom.”
“This music is raw energy, truth and sincerity,” Aliotti said. “There isn’t any faking it. The bands that do this are doing it for the feeling because this isn’t the kind of music that can be marketed, it’s not going to play on the radio or get music videos. In my opinion, this is where the true music is at.”
A Mind Like Yours has played at venues across Oregon, but most often at The Wetlands, John Henry’s and The Black Forest in their hometown of Eugene. Their most recent show at John Henry’s, on May 12, was one of their last. They will play two more shows, one June 2 at The Black Forest and their last the next night at the Samurai Duck in Eugene. 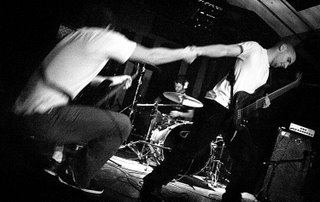 “It’s really weird to think that we have only two shows left in June and that’s it,” said Aliotti. The band members plan to take their experience with them on to separate careers come summer. After graduation, Aliotti will look for work in Seattle or San Francisco as a digital arts professional, while Schwartz moves to Brookings, Ore., to be closer to his finance. Alberes hopes to join the FBI to help in the fight against white-collar crime and Calderón plans to move back to his hometown of Seattle or join relatives in Peru.

The band sees their new three-track album as a culmination of the work and experiences they had in college. “It’s definitely not for a return on our investment,” Schwartz laughs. “It’s more so in the future we can look back and remember what we did and felt.” The album was recorded at Sprout City Studios in Eugene, but Aliotti has been responsible for mixing the tracks on his home computer. When done, the all-black CD will come inside a clear trigger-release case with an artful black sleeve.
Like all students graduating this June, the band members are dispersing, going towards their future. But they are also leaving behind a body of work that they can look back on and remember what shaped and influenced the people they will become. 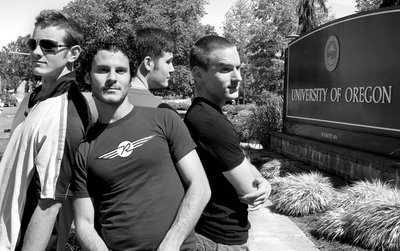